In five weeks time, we'll be on the ferry as it sails out of Cork Harbour.  It's a race against time to get the house sorted out and presentable for rental before we leave.  Our plan is to have it ready for Estate Agent photos at the end of this week, and ready for viewings the week after.

We threw ourselves at it with gusto this weekend - on Saturday, the YD came home and removed a few more bags of "stuff", and we painted the ED's bedroom.  We've now completely painted five rooms, with three left - two large, one small - but we're facing the possibility that we may have to hire someone to finish it off.

Sunday's project was Reclaim the Lounge, which has been crammed full with the ED's possessions since she moved home.
Before we could start on that, though, we had to make space available in the office, which is intended to be our storeroom while we're away.

Once I finished doing the horses, dogs and chickens, I joined the LSH in filling Jeepy up with junk from the office to transport to the skip.  Being the mature fifty-somethings that we are, when we came across the whirly chair on wheels whose seat had worn thin, we just threw it straight in the skip.  Of course.  Haha.

After that little diversion, we got back to work.  The Office was de-cluttered.  Jeepy was emptied into the skip.  Jeepy was filled up again.  Galway Bear and Foxy looked on. 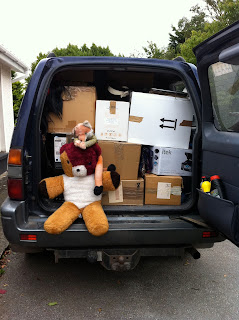 Dylan took advantage of the open door and settled himself in front of the hearth.
Coats were hung in the newly painted back kitchen, boxes were filled, Christmas decorations were finally taken down!!!
And eventually, the three piece suite emerged and the floor was visible. 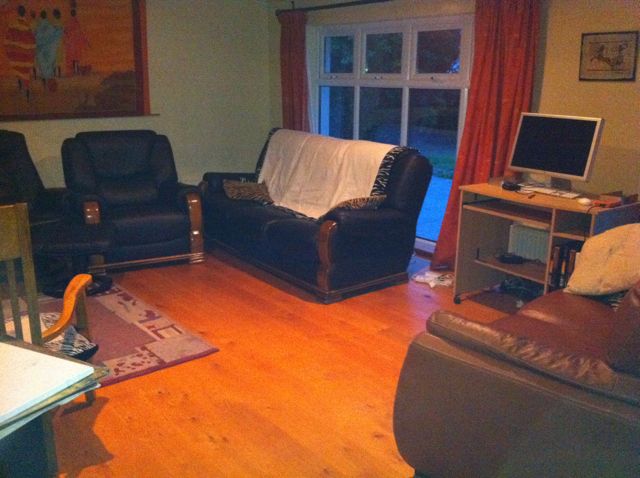 To end the weekend, I itemised all of the horse gear I want to sell and posted it on DoneDeal.  I also shared the link on my Facebook page, and five hours later, I've sold loads of stuff!