I've been to the Dublin Horse Show loads of times, always without a horse, apart from one year when the YD and Aero were asked to take part in a Dressage demo.  The longest I've stayed there is two days - it's difficult to get away when you have a busy household of humans and animals to look after.

I wasn't going to go this year - too much to do, what with the preparations for the move to Provence, but when my daughters gave me a ticket for the whole week, for that Big Birthday I had a while back, of course I was going to go!  At the time, there was talk of one or the other of them going to Dublin as well, for a day or two of horsiness, but that didn't happen.  Nor did the LSH get the opportunity to join me - he was too busy looking after everything at home as well as trying to earn a living.   I was happy to go off on my own, though, confident that I'd meet plenty of people I knew. I wasn't able to go for the full five days, unfortunately, but I had a great three days there.

Dublin is the highlight of the Irish Equestrian calendar.  People have been frantically scrambling to qualify horses and ponies for the showing and show-jumping classes since May.  It's an achievement to qualify - the YD tried hard to qualify for the showjumping, first of all with her 128cm pony Lady Ivy and then with her 138cm pony Ballyclough Lady, but it was not to be, she never rode there as a competitor.

When you walk in, first of all you have to pass the indoor trade stands.  Hundreds and hundreds of them, many of them completely non-horsey, catering for the Dublin socialites who MUST be seen at The Horse Show.  This year was the first year that I really, really "did" the trade stands, but I didn't buy much - I kept thinking in terms of "will it be easy to pack" and "will I use it" and "do I really need it."  I'm not a great shopper at the best of times.  I'm a big disappointment to our failing economy at the moment.

After the tradestands, you walk through a doorway, and suddenly the city around you fades away and you're in Horse Land.  The two showing rings occupy a large space in between the Main Hall and one of the grandstands which overlooks the Main Showjumping arena, and they're busy all day long with ridden and led showing classes.

The first day, I arrived in time to see this slightly chunky judge riding the equally chunky Performance Irish Draughts.  This is a recent innovation, traditionally, Irish Draught horses were just shown in hand.  Now they want to show what good riding horses they make. I really liked this dark grey : 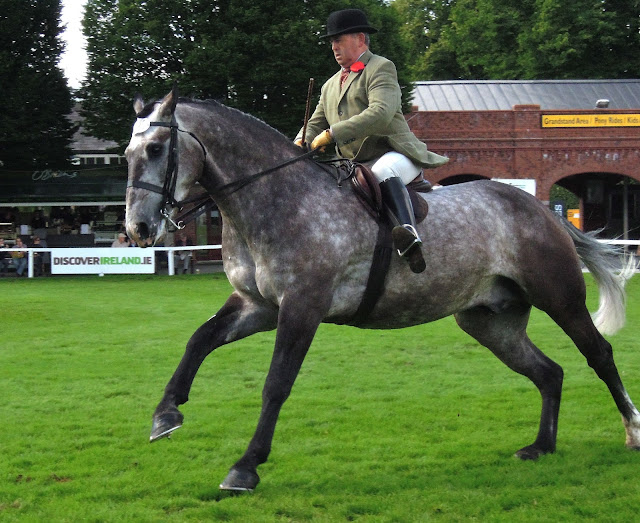 and in fact he went on to win the class.

I watched and played with my camera for a while, trying to capture the moment when the judge asked the horse to gallop from the corner.  I was happy with my timing most of the time : 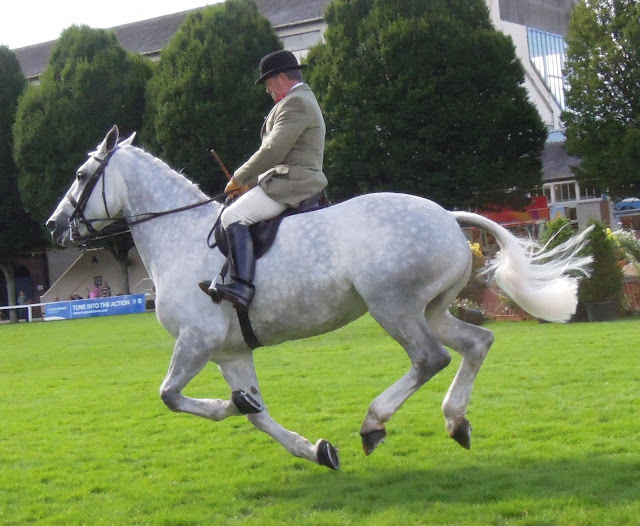 but the photos are not as sharp as I'd like.  Later on, I played around with the settings and things improved.  I think it was just a little dark for the P300 to work well with a fast shutter speed.

Jean François Pignon and his troop of Camargue mares were one of the entertainments for the duration of the show.  They appeared twice a day, sometimes in the main arena and sometimes in Simmonscourt, which is an adjoining section of the showgrounds - it's across a busy street, which is completely closed off to traffic during Horse Show Week.

These horses had arrived the previous day, after travelling from the South of France by truck.  They clearly hadn't seen grass for a while and all they wanted to do was graze.  Each one dutifully left the herd when requested, did whatever was asked of her, and put her head straight back down just as fast as she could.


They do some fairly circus-y stuff, to be honest; running along behind their trainer, rearing on command, kicking out on command, lying down on command... 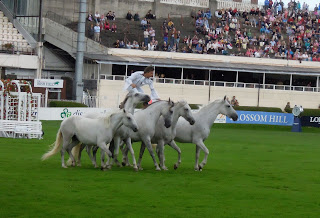 This bit, pictured left, is quite exciting, when he stands on two of them and the herd moves around under him.  The mares were still quite distracted by the lush green grass underfoot - the one who is tossing her head in the photo didn't really want to work, and got a couple of sharp taps with the long whip to remind her what her job was!


As soon as they stopped, so that Jean François could take his bow, all five heads went straight down to the grass again! Yum! Irish grass!
I wasn't super-impressed by the display up to this point, to be honest.  A small grey pony also came running in and joined the show, he was cute but it was still quite circus-y.
What did impress me was when four foals came running out to join their mamas.  To be so focussed on their trainer and so relaxed in a strange environment while separated from their young foals - all less than four months old - shows supreme trust.  To further demonstrate this trust, after the mares and foals were reunited, he split them again, and asked the foals to remain a short distance away from the mums : 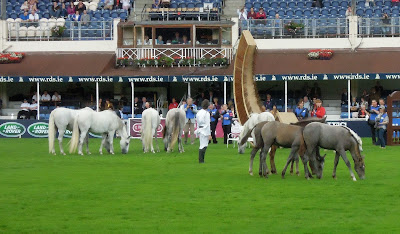 I think the grass started to help at this point!

The main focus of the Dublin Horse Show is undeniably showjumping, and the highlight of the week is the Nations Cup Class, when teams from different countries compete for the prestigious Agha Khan Trophy.  This year, Dublin hosted the final leg of the FEI Nations Cup Super League - eights countries qualify for the Super League every year and compete at eight major international shows.  The bottom two teams get relegated to the Promotional League the following year, so they all fight tooth and nail to retain a good position on the league table.

Proceedings start in the International Arena at 2pm, with a grand parade.  There's marching bands, flags, top hats and tails, national anthems, excited horses, loads of dignitaries and cheering crowds.  I've never sat through it before - I've always been on a tight schedule and considered it a total waste of time.

I loved it!  Especially watching all the horses freaking out when they were expected to walk quietly behind one of these : 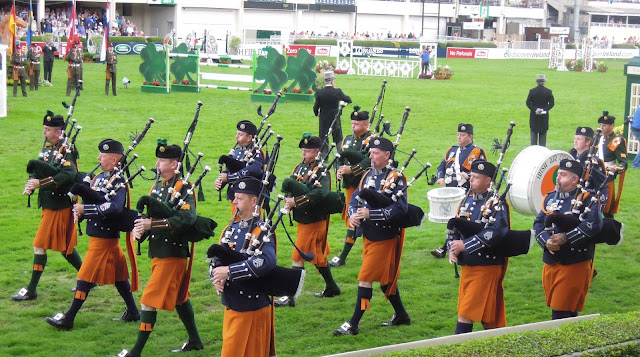 Most riders don't take their competition horse into the parade - it's just too mind-blowing!  Each team lined up in front of the Presidential Box while their anthem was played, here's the Irish team of Clem McMahon, Richie Moloney, Cian O'Connor and Darragh Kerins : 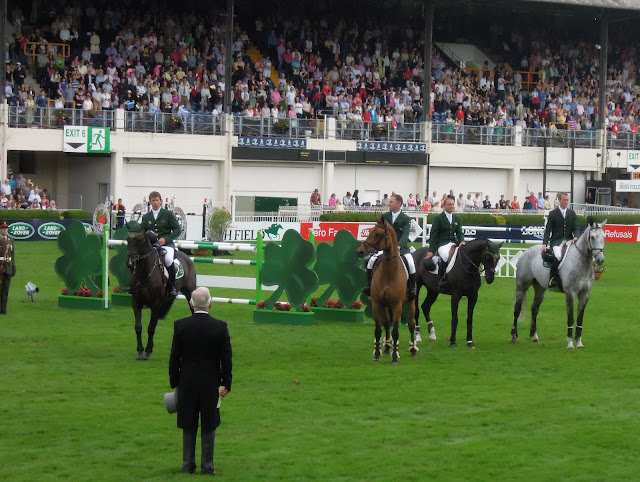 There was some great jumping, this is Ireland's Darragh Kerins and Lisona clearing the bogey fence - loads of riders had this one down : 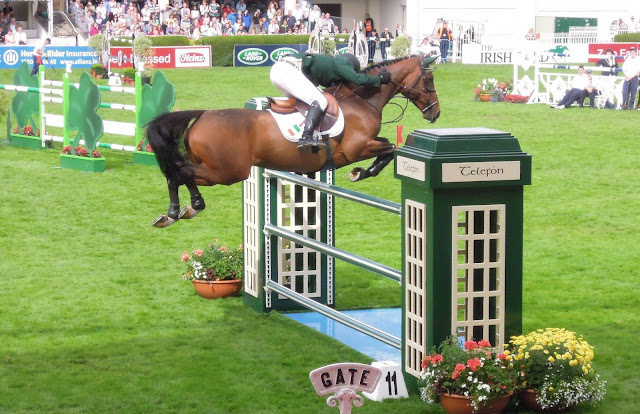 I had fun playing with my camera, I think this is Belgium's Olivier Philippaerts with Cabrio ven de Heffinck : 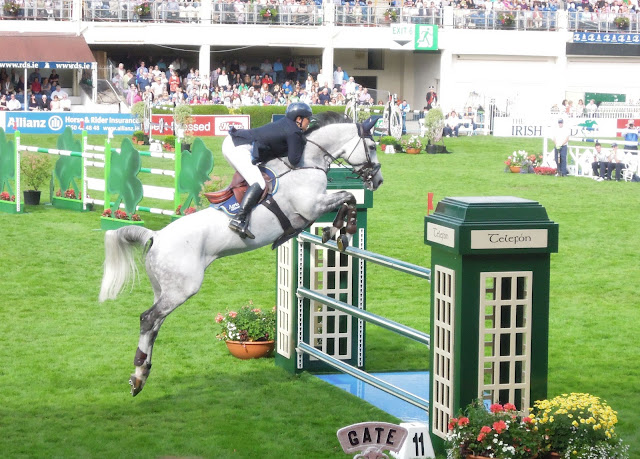 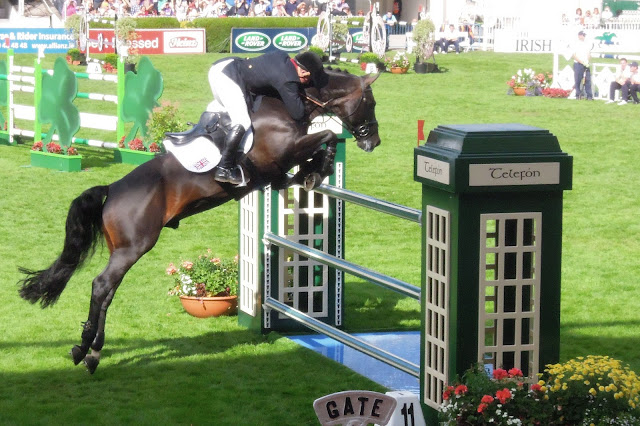 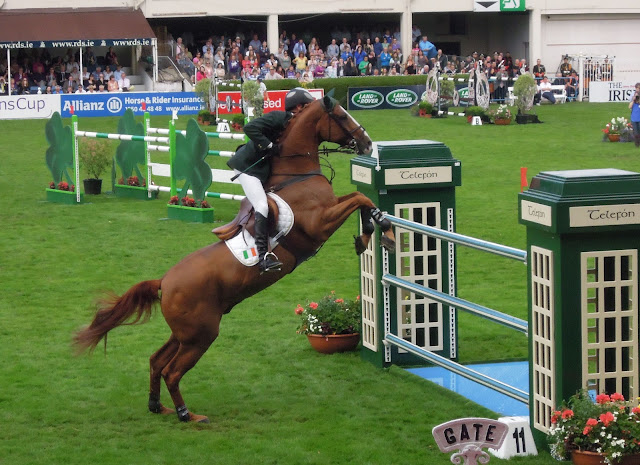 It was a very exciting contest.  I didn't think Ireland would win, in fact I would have put my money on GB if I was going to place a bet, but after the first round, Ireland were in the lead with one time fault.  France and Sweden were right behind on four faults and Great Britain was next with five faults.

John Whitaker went first with Argento - he had two fences down and retired, knowing that his score would now be discarded, leaving the team score at nine.  Next was France's Kevin Staut - he had a fence down early on, and the crowd gasped... did this mean Ireland had won?  Yes it did!  Our last rider, Cian O' Connor didn't have to jump, our final score was five faults, France were second on eight faults and Britain were third on nine.

Then we had all the pomp and circumstance of the prize-giving.  As it happened, I was sitting just in front of the dignitaries box.  The little leprechaun in the centre is Michael D. Higgins, who hails from my former home town, and happens to be President of Ireland!  To the left of him is Fonsie Mealy, president of the Royal Dublin Society, which hosts the Horse Show, and to the left of him is the gleaming gold Agha Khan trophy - donated by the Agha Khan for this event.  It's about the same size as the Irish president, so I was hoping he wouldn't have to lift it! 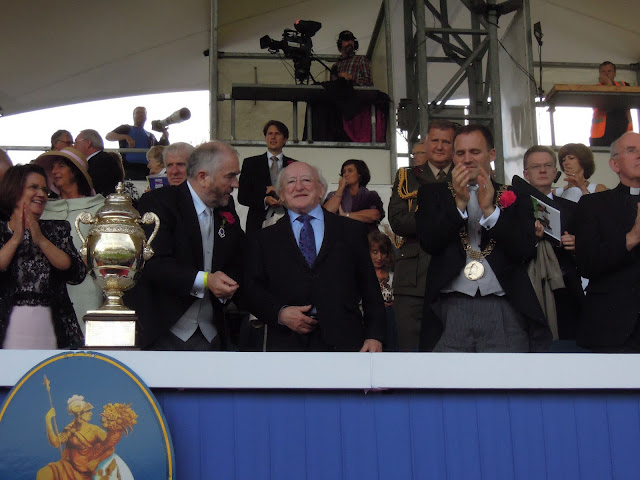 Fortunately, he didn't, it was officiously carried down the steps by an army guy, who also helped him hand it over. 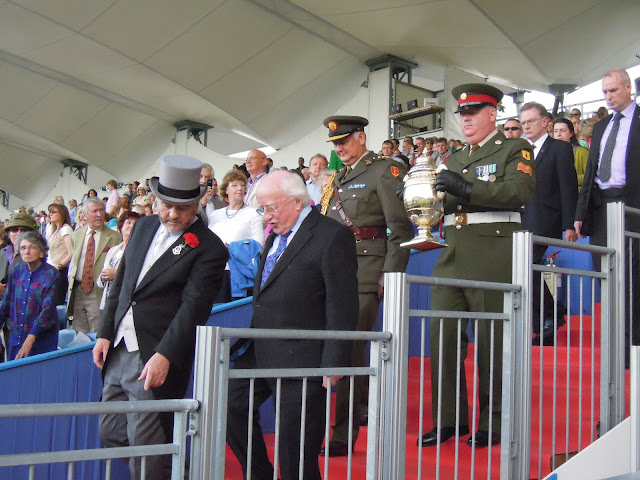 After the presentation, the President was full of cheery waves for the crowd. 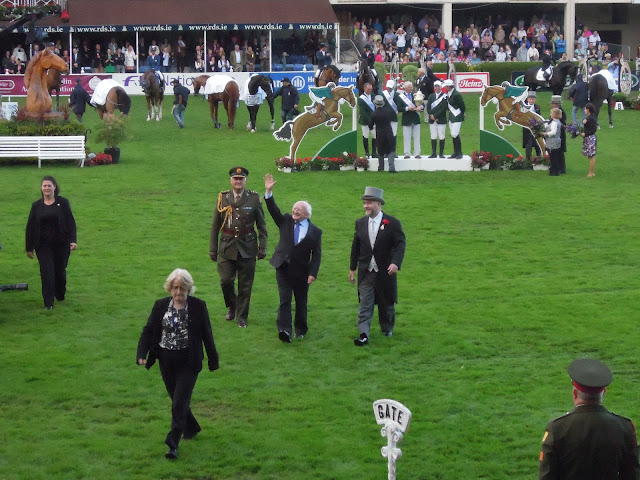 The team faced a barrage of Press photographers

and then had their victory lap.  In white baseball caps.  I'm not impressed. 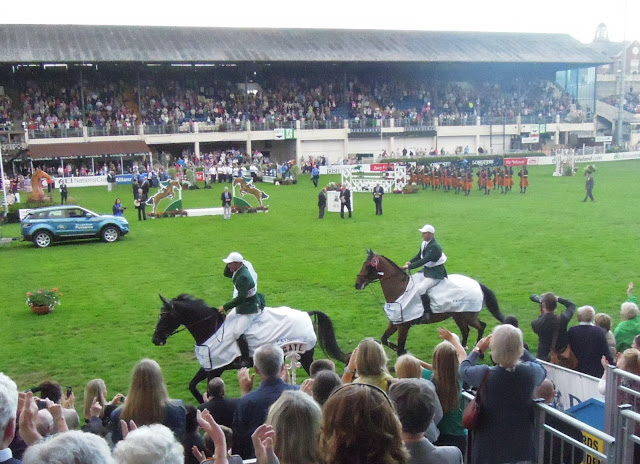 The baseball caps were part of the FEI's sponsorship stuff, like the rugs and sashes.  What kind of message are they putting across, that you must wear your helmet while jumping, but not while your horses are galloping around in a victory lap?  Grrr!

I made sure I got a photo of Olympic Gold Medallist, Steve Guerdat : 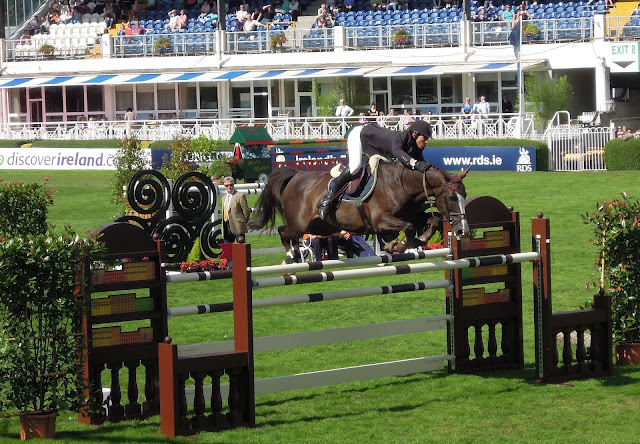 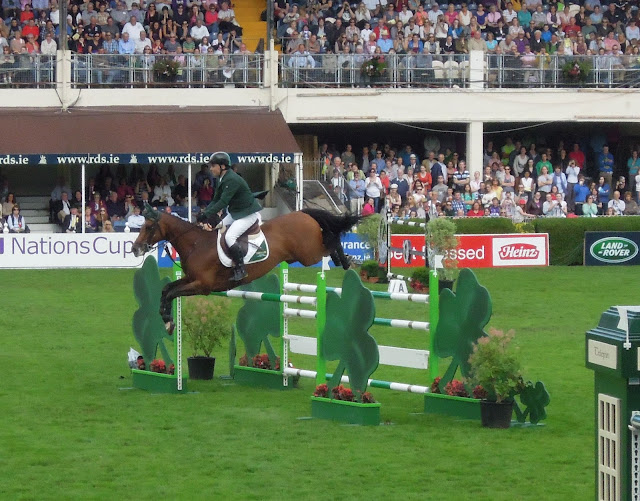 but the photos I was happiest to get were these : 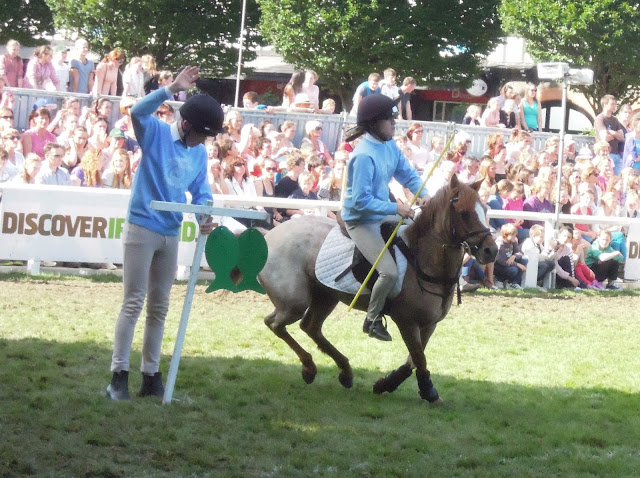 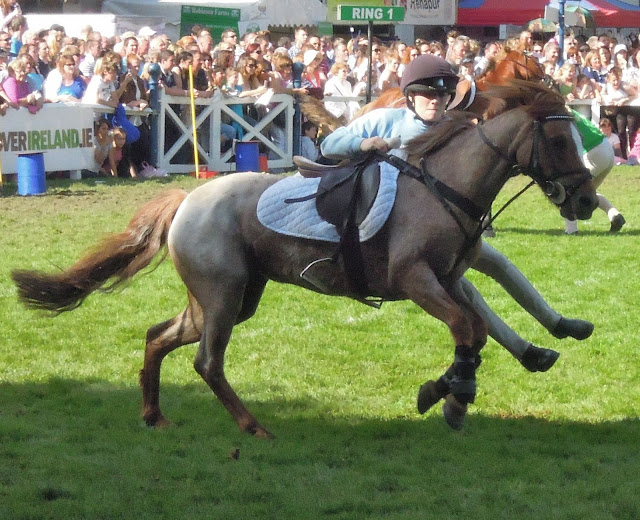 This little roan pony is the first pony I ever bred, Toffee.  I didn't expect to see her at Dublin, but there she was, nineteen years old, and still going strong, competing in the Pony Club Games at the show.  She's a games expert - we tried to make her into a jumping pony, but she wasn't interested and ended up going to a friend for Pony Club.  She's won loads of games championships and has even represented Ireland abroad.

I left early on the last day and returned to my cousin's house, to join in the celebrations after her grandson's christening.  She lives in the coolest house in Dublin.  Yes, this really is her house - complete with clock tower and gargoyles! 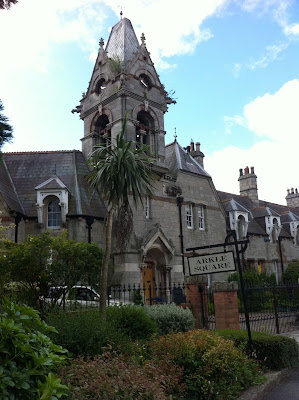 Back to normailty now, treating Aero's foot, attempting to tidy the house, sizing up how much more painting has to be done.
Posted by Martine at 14:28