I've had a "bootylicious" kind of week.

Marie-Christine gave me the name of a French website, sosabots.com, which sells a wide range of boots, including Renegades, so I ordered a new pair of size 2Ws, for Aero's front feet.  They arrived within a few days, so it was time to, finally, throw out the "Holey Renegade" left hind boot which Flurry wore through on the Big Trek.   Not before I stripped it of its assets, mind you - I now have two spare cables, a spare heel captivator and a spare button thingy from the front, complete with two teeny screws, AND I'm keeping the very-worn-but-not-actually-holey right boot as a complete spare.
The day after I dumped it, I took Flurry for a hack.  He's been a little tender in his feet recently, so I put on his front boots.  We were nearly back at the farm, climbing up a rocky ascent, when he stumbled.  "That's a boot gone" I thought, and I looked down.  Sure enough, the front left was missing, but fortunately I spotted it on the ground, a short distance behind us.  I hopped down to pick it up and glanced at the front right - what the heck?  The boot seemed to have twisted around completely, so that the heel captivator was sitting on the front of his pastern.

On closer inspection, though, he had lost the entire sole of the boot - the cables had not actually snapped, but had been pulled apart.  Well, crap, where did I lose that, I thought - we had covered about 5km and I didn't fancy walking all the way around, looking for half a boot.  When I thought for a moment, I figured it must have come off fairly recently - we'd had a very short stretch on a road a short while back, and I definitely would have noticed if it was missing at that point.

Much to Flurry's disgust, I set off back down the rocky slope to search.  I could practically hear him saying "But... but... I can see the stables from here... why have we turned around?"

Good decision, though - there was the half-boot, right down at the bottom of the slope, where we had crossed a dry watercourse.

After tying the bits of boot onto the saddle in a makeshift sort of way (note to self, fasten an old flash noseband onto the D-rings for future boot-hanging) I remounted and we made our way back up the slope again.

He felt fine without his boots, I suspect I needn't have bothered putting them on at all.

I spent some time that evening re-assembling the broken boot.  Getting the mud off was the biggest problem and took ages.   Once it was clean and dry, I had it fixed in no time, thanks to Renegade's very useful "how to" pages. 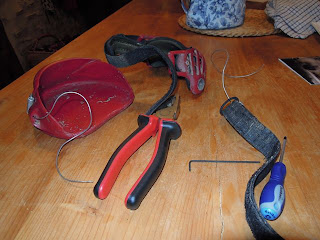 The incident made me a little doubtful about his Renegades, for the first time.  I have no idea why the boots came off and the cables were pulled.  We covered much rougher, rockier ground on the Big Trek with no issues and I'm wondering have his feet changed so that the boots no longer fit as well as they used to.  I decided it might be time to start experimenting with his Cavallo Sport boots, which I bought as emergency spares back in April - up to now, the only use they've had has been as a poultice boot for Aero!

The next day, I put them on him and took him for a short walk. 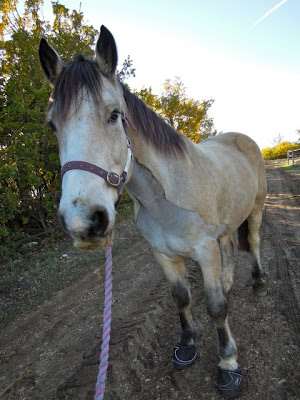 They're not as easy to put on and take off as the Renegades... or maybe I just need to get used to them.  The velcro closures are easier to use then the Renegade straps, though.

After the very short walk, his heels looked shiny - I think they would be rubbed if we went for any sort of distance.  The amount of feather (and associated mud) on Flurry's fetlocks is probably not helping, and may need to come off if we want to give these boots a fair trial.  Although we bought Cavallo "socks" which are supposed to protect the heels, I suspect the boots won't fit over the socks, but I will try them next time.

I might be selling a nice new pair of Cavallos soon... 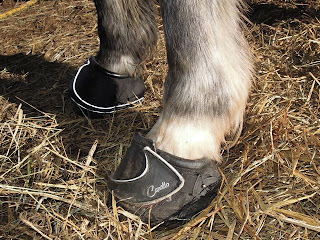 For the moment, though, I will try him barefoot and hope he feels good enough to go bootless.
Posted by Martine at 22:23