A Guest of the (French) Nation

Before I left Ireland, I went for a general health check-up.  I'd never had one before, but I thought that the 50-year milestone and the impending departure to France made it good idea to get myself checked out.

The only bit of me that's not healthy is - well, I don't know which bit, exactly.  Some part of me that's blocking my body's ability to absorb Vitamin B12.  Normally, the cause turns out to be lack of something called Intrinsic factor, but I have plenty of that.  B12 is essential for iron absorption, so a B12 deficiency and anaemia usually go hand in hand, but I'm not anaemic.  B12 is also important in nerve function and a deficiency can cause pins and needles and numbness.  Yeah, I get pins and needles in my hands and feet several times a day.  Numbness, not so much.

My Irish GP prescribed B12 tablets, and just before we left I had another blood test.  Unfortunately, it showed that I was still deficient, so it looks like I'm just unable to process it.

You'll need B12 injections for the rest of your life, said the Irish medic.  See a GP as soon as you get to France and get it sorted out.

I duly trotted along to the French GP within a week or so of arriving here.  My first medical appointment in French without Anne riding shotgun to translate for me - aaargh - but I coped fine, thankfully, and didn't have to resort to Google Translate which I had installed on my iPhone just in case!

Anyhow, the French GP wasn't happy with just dispensing B12 injections willy-nilly and sent me off to see a consultant to try to diagnose the cause rather than just treat the symptoms, which seems like quite a sensible approach really.

So I found myself back in Apt hospital, meeting the digestive system consultant, who is a nice man from Mauritius.  I failed miserably in my attempts to understand his French (which crushed my burgeoning confidence, but he does have a bit of an accent) but he smoothly switched to English (phew).  He seemed very confident that he would find something going on in my stomach which would explain the B12 deficiency, and we made an appointment for a gastroscopy.

While I was in the hospital, I visited the records office to give them my new address.  Long time readers who have followed me here from The Wanderly Wagons know that I was in Apt hospital with a broken wrist last January - new readers, well, you know now!

Two days later, there was post for me.  A bill.  From the hospital.  For the broken wrist treatment - one night in hospital, several x-rays, two rounds of orthopaedic surgery and several clinic visits.  It seems like they hadn't known where to send my bill beforehand, and when I notified them of my new address a red flashing light went off somewhere to say THIS WOMAN OWES US MONEY! 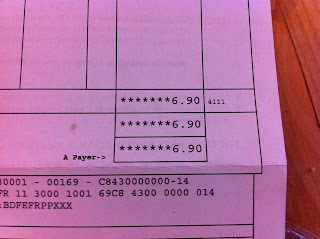 I know that European countries have a reciprocal arrangement (the EHIC card)
whereby the patient pays no more than he/she would have paid in their home country, but in Ireland, this would have cost me €100 for the visit to Accident & Emergency alone, and my health insurance would have been hit with the rest.  Vive la France, is all I can say.

Moving back to the present, Monday to be precise, I was once again a Guest of the French Nation at Apt hospital to have the gastroscopy. The good news is that my French has really improved since last March.  I didn't misunderstand anything at any stage during the day, in fact the anaesthetist was teasing me about my accent before he knocked me out, but at least I have an accent to be teased about now!

The other good news is that I have a wonderfully healthy looking stomach.  I know this for a fact - I have the photographs of the inside of my stomach, and I have seen the pictures of my mother's extremely unhealthy stomach (she had an ulcer that was microns away from perforating).  The bad news is that the formerly-uber-confident doctor is now at a loss as to what's causing the B12 deficiency.  Apparently it's possible that there's something very rare going on in the small intestine which could be causing it and we might someday do a colonoscopy to check it out, but for the moment, I'm trying a liquid B12 supplement to see if I can absorb it better than the tablets, and if that doesn't work, guess what?

I'll have to have B12 injections for the rest of my life.

(I'm not sure, but maybe it would have been simpler just to start the B12 injections last October...)

Blogging will be sporadic for the next few weeks, our Christmas holidays begin on Friday, but I promise I will try to keep posting!

Cinnamon is going to stay with friends while we are away and the horses will be perfectly happy at The Farm without me, although I will definitely miss them.  Cookie stayed with a new-found English friend last week while we were back in Ireland.  If it worked out, they said they would keep her over Christmas, so our fingers were very much crossed...

It didn't work out.  Cookie did not shred their cushions, savage any children, poop and pee all over the house, escape and kill all the neighbours cats and chickens or bite our new friends.

No, there was a totally unforeseen problem - it turned out that one of our new friends is violently allergic to our problem dog.  Within less than twelve hours of Cookie arriving at her house, her eyes and face had swollen alarmingly and she now has to take anti-histamines for the next three months.  So Cookie is off to kennels, but we are going to leave her crate with her, with a horse rug draped over it - that should help her stay warm, and we'll leave a little doggy coat with her too in case it gets really cold while we're gone.