The rain has stopped, the snow is gone and the weather has warmed up!  There are little flowers appearing everywhere.  At the horse farm, there are wild crocuses all over the place.  I didn't expect to see them, but there they are, springing up through the dead oak leaves, looking ever so pretty!  Back home, we have mini-daffodils in bloom beside the garage door and real Irish crocuses flowering in pots.  These were a farewell gift from a Cork friend - she bought a two sets of various bulbs, she has them growing in Cork and I have them growing in Provence.  Hers are far, far ahead of mine, but I'll still enjoy mine when the whole pot as a-bloom!


But to more serious matters... did I live up to my promise and get my saggy butt into the saddle?  Yes I did!  I did a little work with Aero yesterday - I lunged him for about ten minutes and rode him in the arena for about twenty.  He was a good boy, a little excited on the lunge but pretty sensible in the arena.  Then today, the LSH decided to come out on a hack with me so in the late afternoon we headed up to the farm.  It was sunny and warm - about 14C, I think.  Both horses seemed happy at the prospect of a little work, although Flurry was once again coated in a layer of mud.  When the LSH went to fit his front boots, though, he found another problem - the Cavallo sport boots were always a tight fit, and Flurry is now in need of a trim after several weeks on soft ground.  There was no way the boots would go on, so we had to break out the rasp and give him an on-the-spot trim.  We took his heels down a little (I think they could come down even more) and levelled off the walls.  At that stage it was clear just how much toe we could round off - there was a thick layer of wall visible outside the white line.  Cautiously, cautiously - we're amateurs, after all - we trimmed it back until his boots would fit.  I plan on having another go at him tomorrow, to take the heels down and level off the sole another bit.  I'm also looking at Aero's feet and going "Hmmm...I could do a little bit there, too... "

Finally, we were ready to go and we headed off, keeping to trails that would not be too muddy and treacherous.  Both horses were definitely happy to be out and about again, as were their riders! 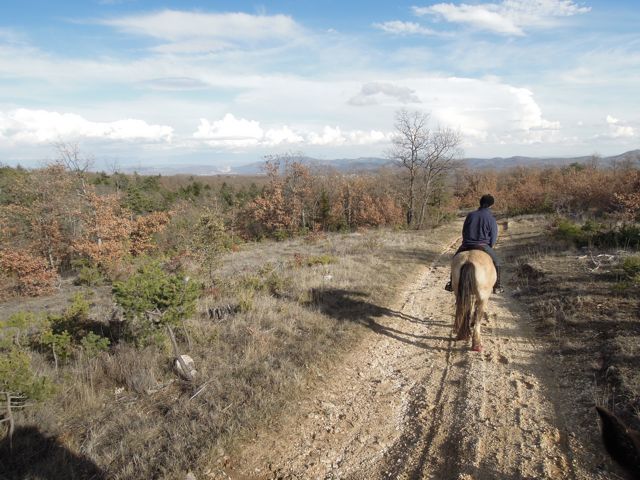 C'mon Spring, we're waiting for you!