Diary of a Small Brown Dog

Saturday, July 7th
We were left to fend for ourselves once more this morning.  After breakfast, of course.  And after we’d done a brief perimeter patrol.  The humans said something about a market and not wanting to have dogs pulling out of them – I don’t know what they could possibly mean by that!
We don't mind being left behind so much now.  We climb onto the table where the humans eat their food and we can sit and look out of the window.  A lot of cars, people, dogs and even cats go by, but we scare them all away with our ferocious barking.  We are dangerous and they know it!
The humans must have felt guilty about leaving us, and they came back for us after a short while.  We all went off in the hot, stinky jeep.  We ended up in a place I remembered, the ground was very red, but it was much hotter this time.  It was nice, though, the red ground is interesting.  I like looking at it. 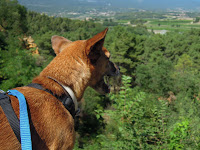 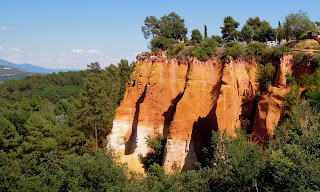 The humans had ice cream.  I tried hypnosis again.  I think I’m getting quite good at it now.  Ice cream is very nice. 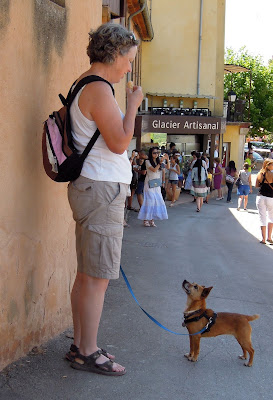 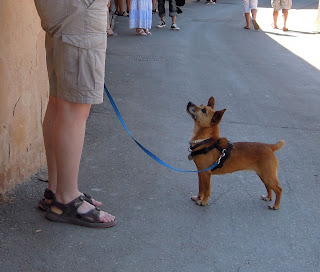 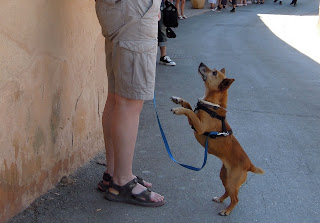 
Sunday, July 8th
Today was…different.  The humans went away for ages and ages, but they took Cookie with them.  And me? I got to stay in our “proper” house!  It was great!  The humans who are there now are really nice and I got lots of cuddles, plenty of food and (shhhhh!) I was allowed to cuddle up with them on the couch.  The cats and Poppy stayed out of my way all day, which was fine by me!
I'm now curled up in my bedroom with Poppy.  It's very late.  My humans are still missing.  I hope they are ok. 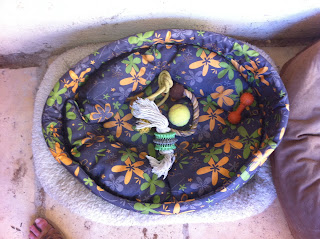 I am still in our “proper” house.  No sign of Cookie and the humans, but I don't care anymore.  The humans here are great.  I think I will stay with them forever!
Today I found a big box of dog toys – lovely chewy things and balls with fur on (well they used to have fur on, sorry Poppy) so I buried loads of them in my bed to keep forever.  Unfortunately, the humans spotted them and took them out.  I will have to work on my burying skills.

What’s that noise? Oh, it’s the jeep.  Damn, it’s the humans and Cookie.  I will have to pretend to be happy to see them.  Ok, here we go, ears pricked, tail wagging, sparkly eyes….

Tuesday, July 10th
We had a very quiet day today.  The humans said they went out “for a walk” but I don’t believe them – there is no way they would dare to go for a walk without us.  Cookie and I sat on the table and scared people away from our house all morning.  Then we did a very short perimeter patrol around the streets of Céreste late in the afternoon.  All was well. 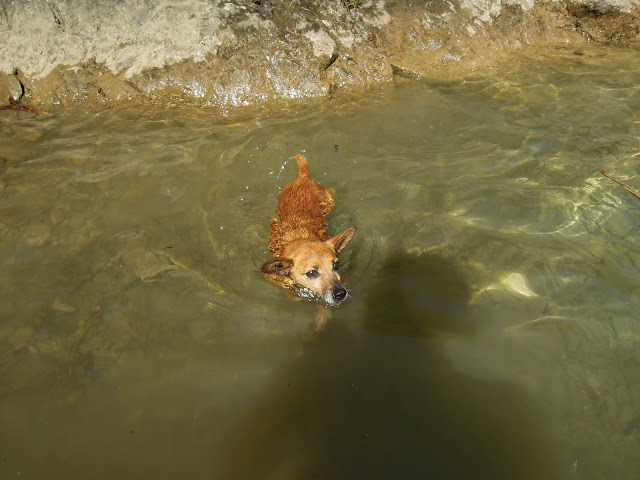 Cookie was not so keen, although she swam a bit at the start.  Then she stood on a rock and refused to move. 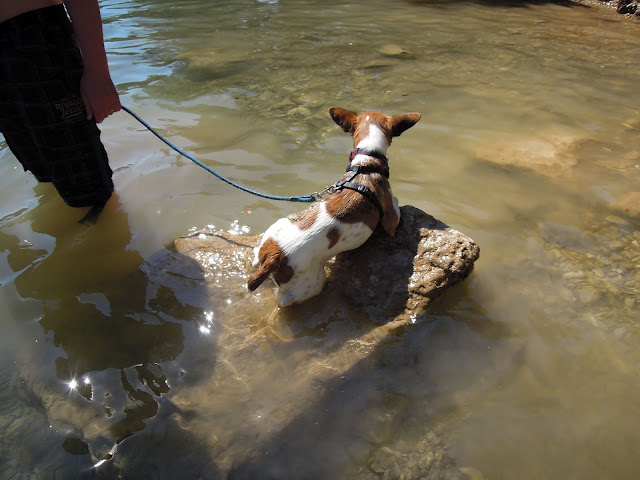 I climbed up beside her to tell her how much fun I was having in the water, so she pushed me back in.  A bit cheeky, I think.
The humans continued to try to encourage her into the water, but she suddenly pulled back and wriggled out of the harness.  What a clever trick!  I must try to figure it out!
Anyway, it seems she wanted to play chasing, not swimming.  She ran around and around, through the woods, down to the water, back up the little beach, leapt over a man who was lying in the sun (he was a bit surprised the first time, but got used to it after a few times), and back into the woods…. again and again and again.
The humans were having so much fun with me that they refused to play chase with her. 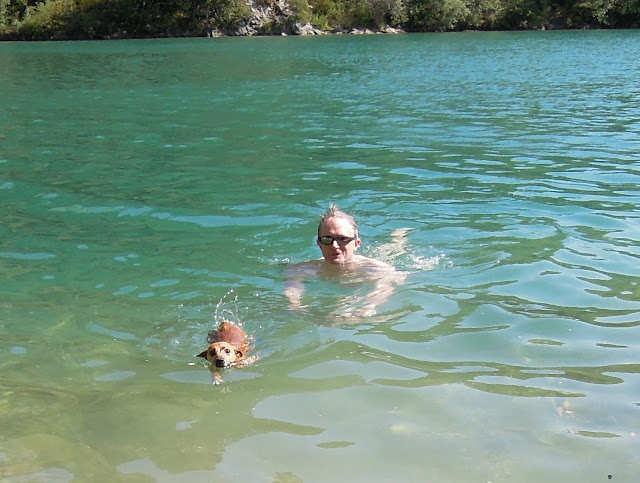 She was a bit put out by this and redoubled her efforts, even climbing into a tree a little bit to try to entice them closer, but it still didn’t work.  I was clearly much more interesting than her, especially when one of the humans and I picked up a scent under some rocks.  I think it was lizard – maybe even one of the ones with no legs!  It was fascinating!  Even Cookie wanted to see what it was, so she came over too, but the fun ended quickly when She-human grabbed Cookie by the neck and said “Gotcha!”
They kept Cookie on a short leash after that.  Cookie was still laughing after all her fun, though.

Thursday, July 12th
We decided to stay at home and relax today.  I love the sun and the warmth now!  I like to lie on the balcony in the sun and get really hot, then I like to come back into the cool house and get cold again. 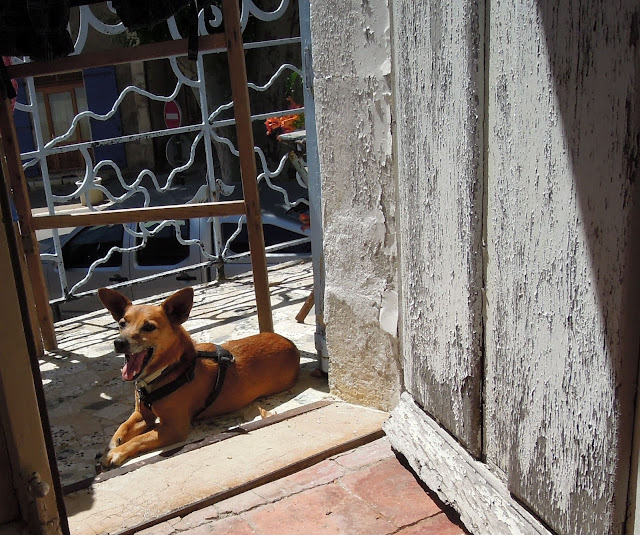 The humans got ice-creams later on. 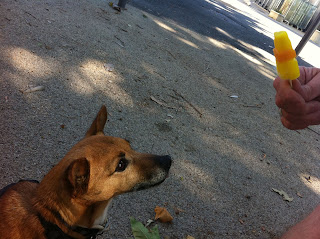 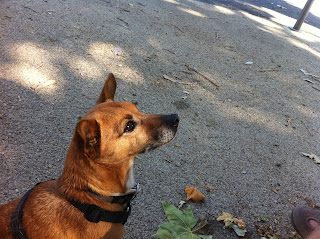 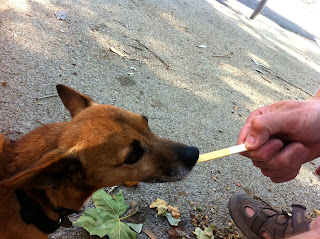 Yum!  I love it here now.  I hope we are staying here forever.

Friday, June 13th
I’ve got a really bad feeling.  The humans have been packing and tidying all day, so that there are no nice brown and white hairs to be seen anymore.  Maybe they are going away without us!  I’d miss them, but it would be ok if we could stay in our other house with the nice people there.
Later on, we were taken to a Vet.  I found the place where all the dog-food in the world is stored... 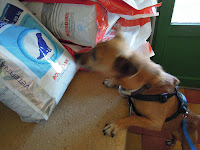 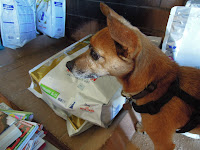 bags and bags of it! 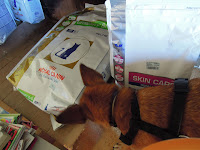 I didn’t have enough time to open a bag, though, we had to go in to talk to the Vet.  He held the white bleeping wand over my head, looked in my eyes and ears  and mouth and held the cold coin tubing thing to my chest.  He talked to the humans about me having a heart murmur… I’m not sure what that is.  Cookie doesn’t have one, though.  Lucky me!
I remember previous Vet visits like this.  They were all followed by a long drive. Sigh.
I hope there won’t be any more prison cells on Ferryships.

Saturday, June 14th
Yes, there was a long drive ahead of us.  It wasn’t as hot as the last time though.  The humans put our bed in the middle part of the car and hung a thing on the window which blocked the sun.  I like to see out, though, but I could put my head behind it and look, so it was ok. 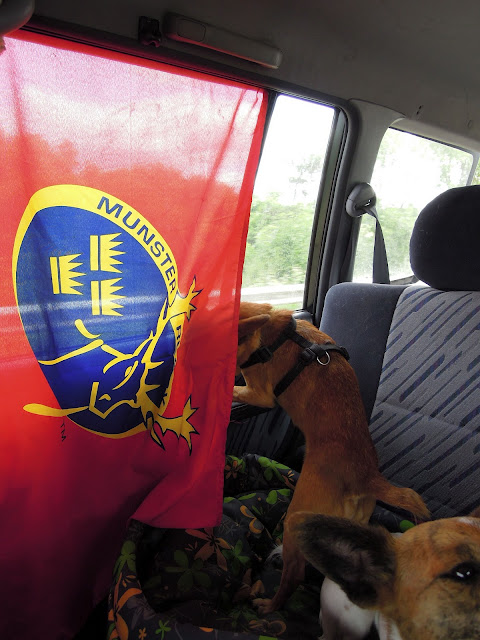 We slept a lot. 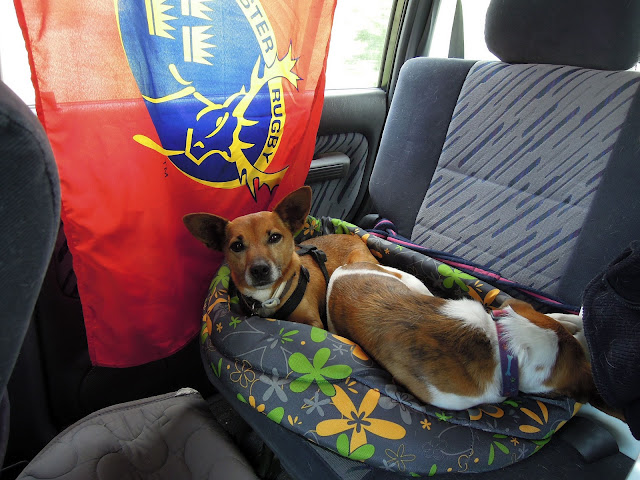 Then we arrived in the same place we stayed before, where all four of us slept in one room.
We ate with lots of other people.  I like it when we do that.  I work my hypnosis on the other people in the room to try to make them drop food. 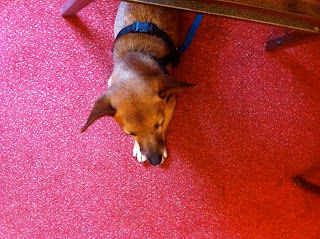 
Sometimes it works, but not today. 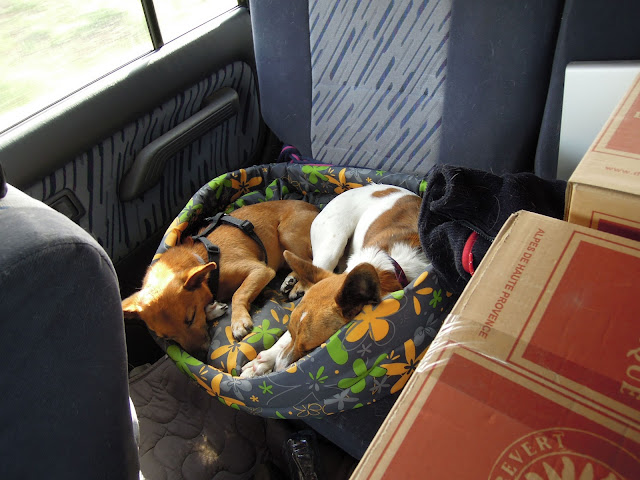 Then, as I feared, incarceration in the Ferryship.  No, humans!  Don't go! We hate it here! 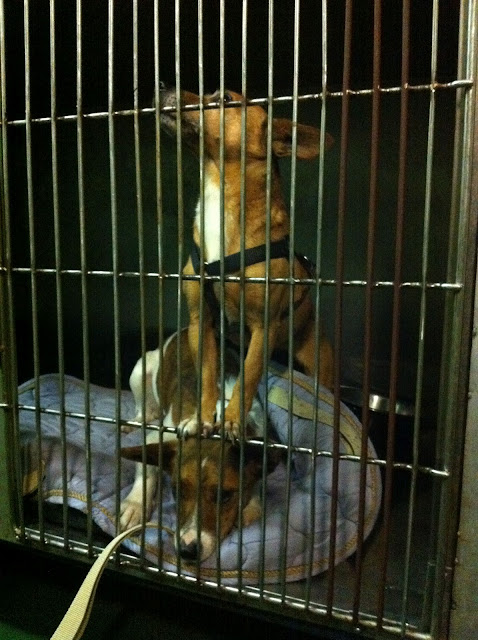