Messin' with my Macro

There are lots of flowers I don't recognise, but they are really pretty!  After much research, I learned that this one is called Mauve Sylvestre.  It's everywhere! 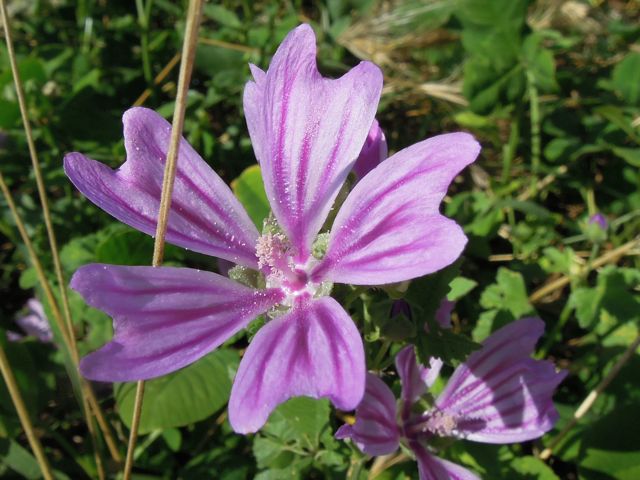 When we stopped to photograph sunflowers a couple of days ago, I noticed hundreds of these tiny white snails in the long grass beside the jeep.  I assume they're not edible, or they would not exist at the side of the road in such numbers. 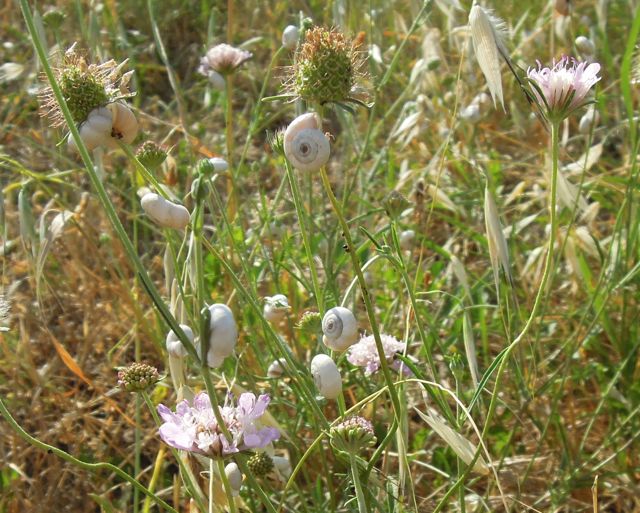 Then I saw even more of them two days later, clustered at the top of an electric fencing post.  They must be getting quite a buzz up there! 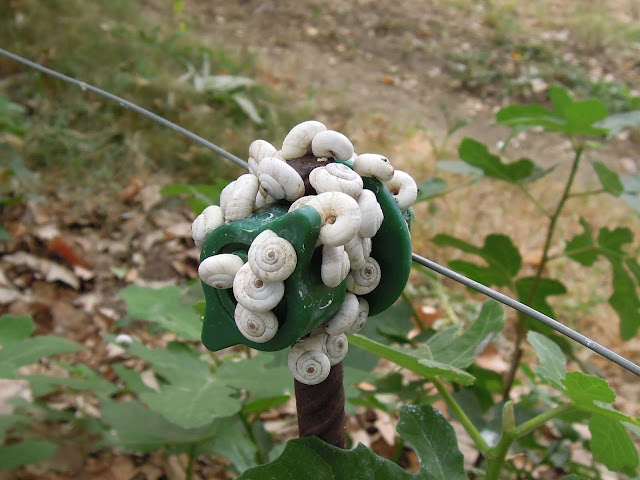 I love jasmine, and I've seen what I think is wild jasmine a couple of times.  I stopped to photograph one, took this photo 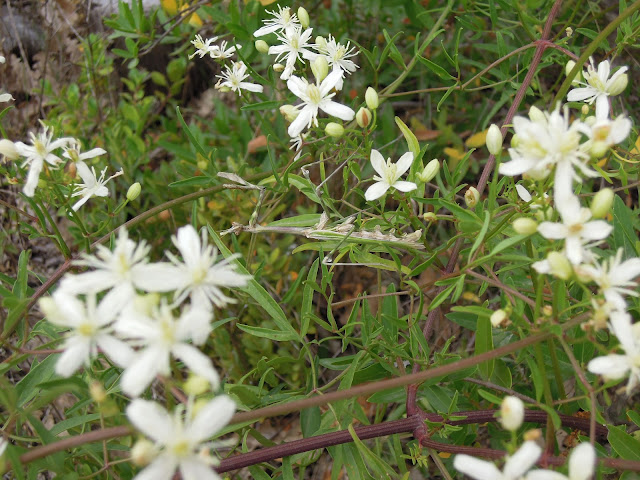 and then realised what I was looking at!  My very first real-life praying mantis!  He's upside down, head is at the left of the photo, about 1/5th of the way in, and abdomen is over to the right - it looks just like a grass seed head. 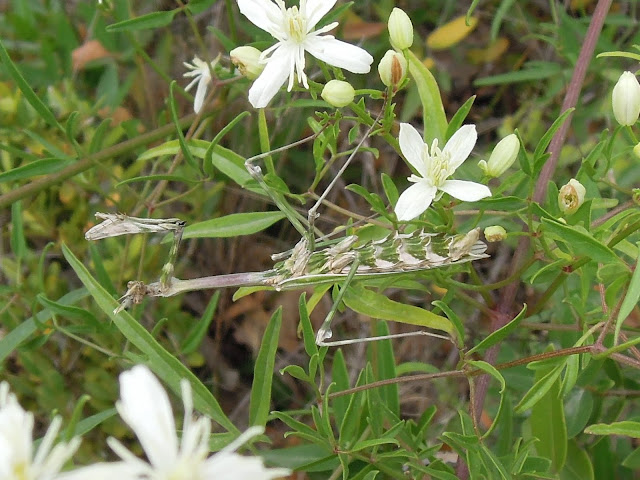 The next subject was much prettier - a swallowtail butterfly, perhaps a little faded but still very beautiful.  I didn't use the macro feature this time, he was too shy to let me get close, so I zoomed in as much as I could.  Thankfully the image was sharp enough to cope with very close cropping, so I was able to pull it in even closer.
I'm quite pleased with this - the LSH has a similar shot, taken with a much more powerful zoom, and although his would no doubt look better in print, they both look much the same at this sort of resolution. 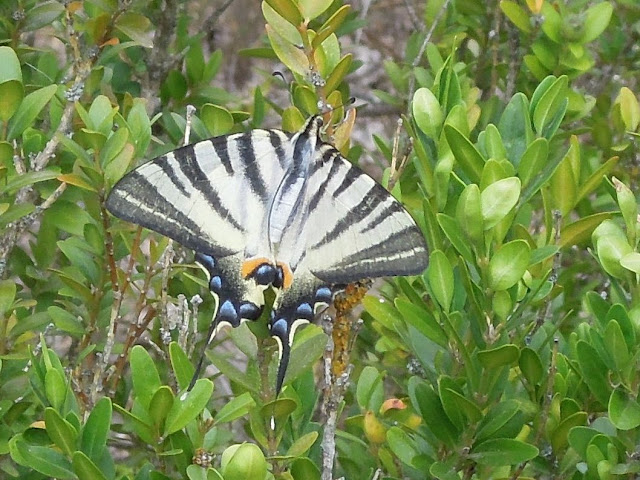 I'm not always successful with the macro.  For reasons I haven't yet figured out, it occasionally focusses on the background, despite the subject being in the middle of the view screen, with the green focussing square right on it.  This is one such failure, you can see the grass in the background is perfectly sharp, yet the wild garlic flower and interesting beetle are completely blurred. 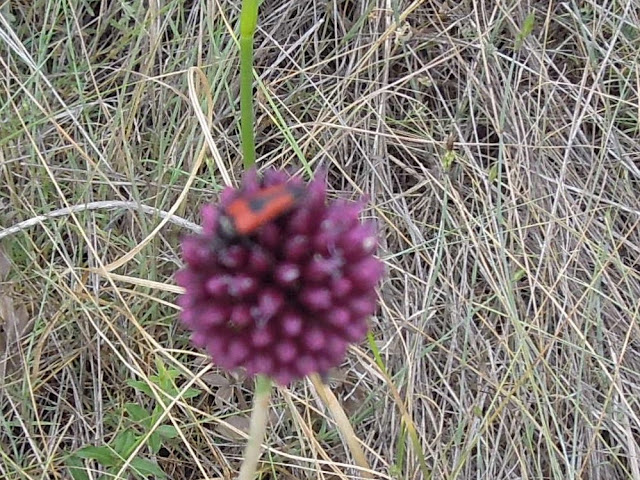 After the success with the praying mantis and the swallowtail butterfly, I stuck to bugs for a while.  I think these are baby scarab beetles : 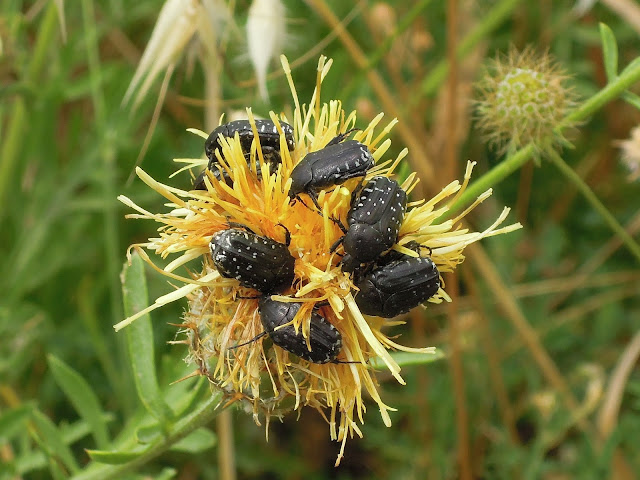 and here's the big Daddy : 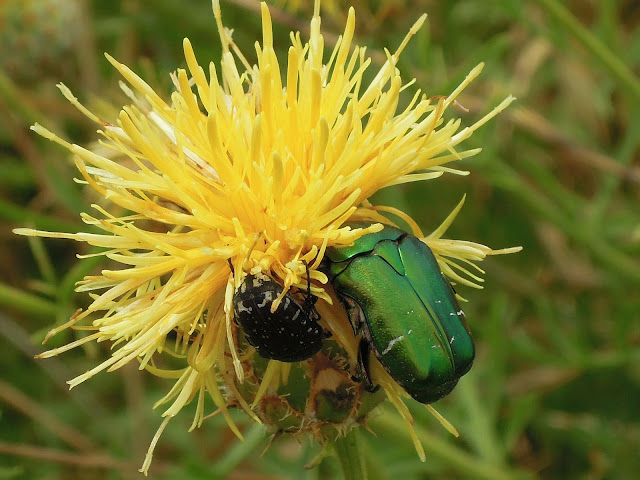 There are red and black beetles all over the place here.  They make great photos just because they are so contrasty! 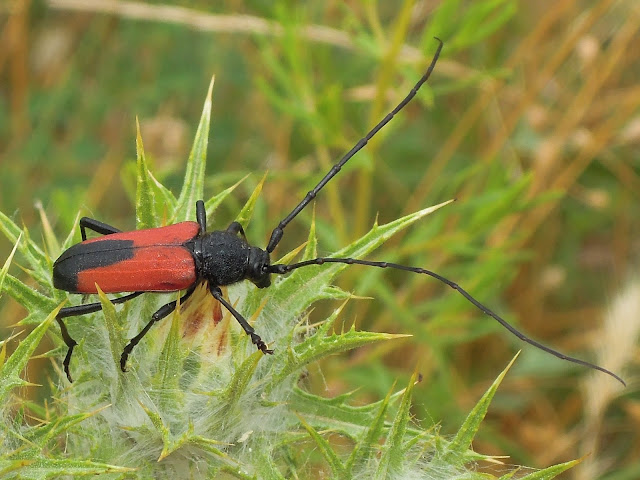 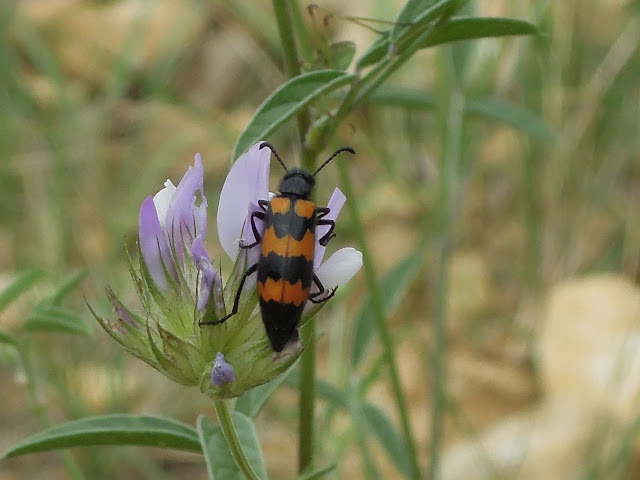 We were doing the 10km hike around Montjustin when I spotted this a cricket hopping across the path.  Macro Mode decided to go into "I can't focus" Mode (I have no idea what I am doing to make that happen) so I got as close as I could in normal mode.  The result was sharp enough to crop really close again.  You can even see his little eyes!!! 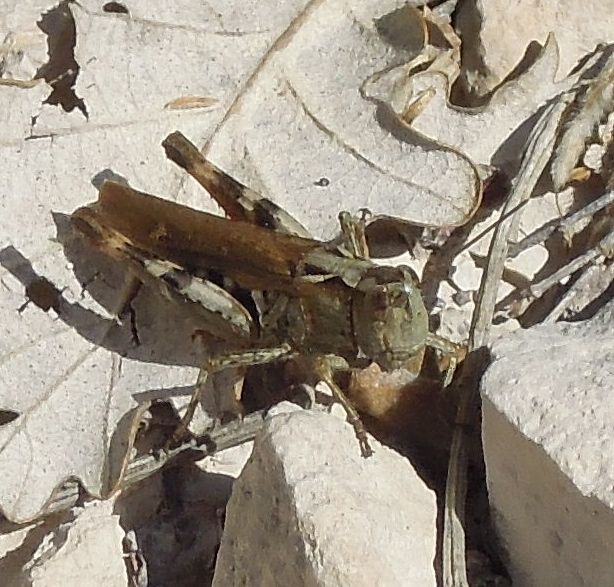 There are loads of butterflies here, far more than we see at home.  Most of them refuse to pose, and are quite shy - if you approach them while they are resting they quickly fly away again.  I saw lots of these on some blackberry bushes.  They were so absorbed in feeding that I got quite close and took a few photos.  Actually, I took about twenty photos, only two of them are any good! 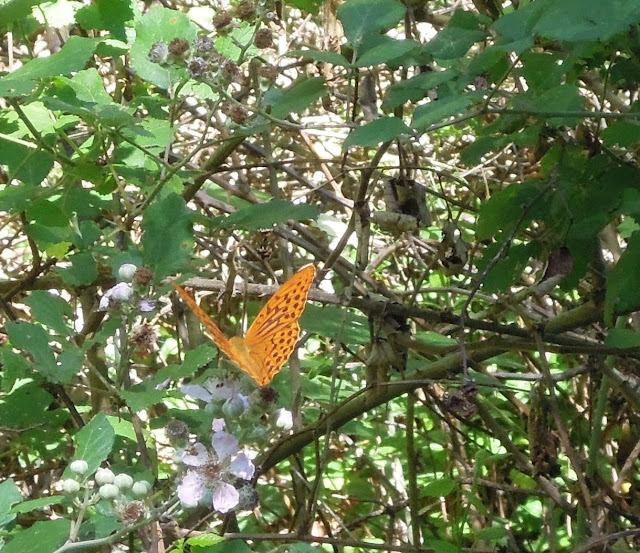 These are Marsh Fritillary butterflies.  I've never seen them in Ireland, although I think they do occur occasionally. 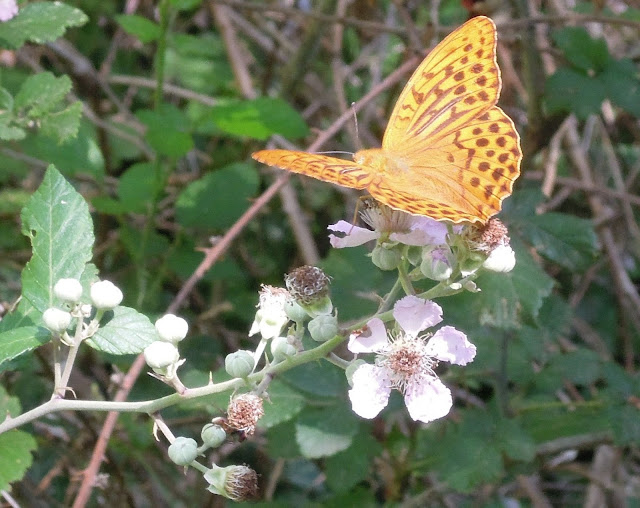 We saw this guy squished on the road - at first glance he doesn't seem squished, but when you look closely you can see his head is a little mis-shapen.  I have no idea what kind of snake he is, so any suggestions will be gratefully received.  We think he is possibly a Smooth Snake - but he seems a bit small, they are 25cm when hatched and I would say this chap is about 15cm. 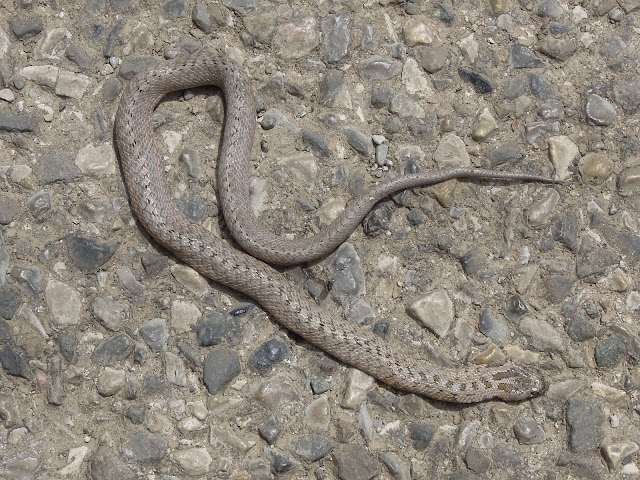 "There's a warm summer's breeze that makes the red poppies dance..." a line from "The Green Fields of France," a powerful anti-war song by Eric Bogle.  I get it in my head every time I see poppies! 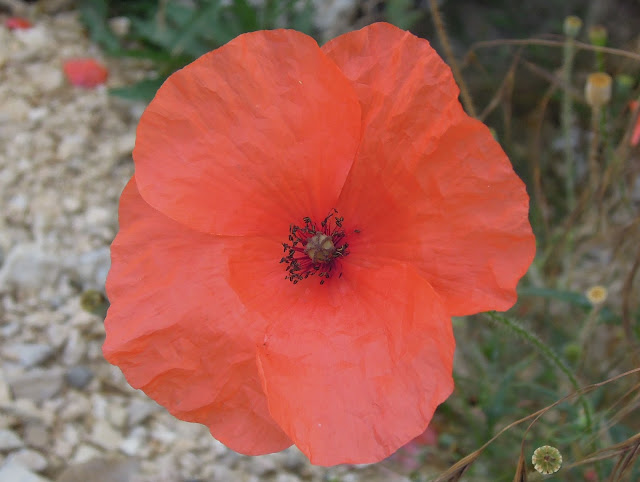 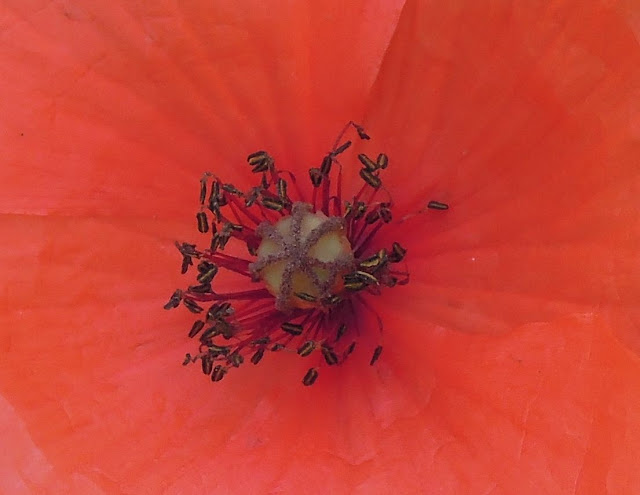 Finally, a very non-macro shot!  We were traipsing through the woods below Montjustin when I heard the sound of a buzzard keening overhead.  Sure enough, there were two of them wheeling around above us.  I zoomed in as much as possible, cropped in close afterwards and here's the result : 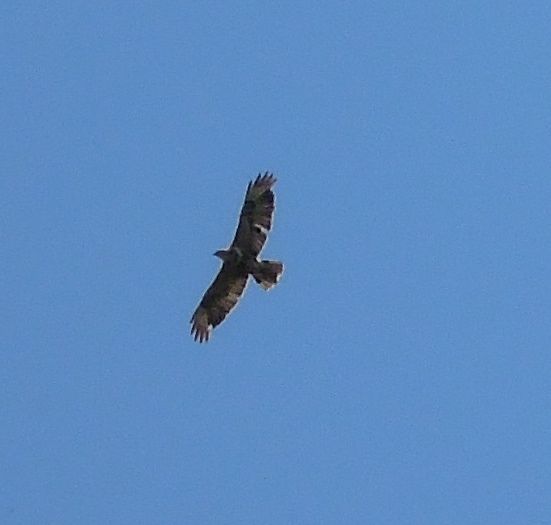 I've been corrected on the above - apparently it's a Booted Eagle, which makes the keening noise as it flies.  Thanks, Bro!

All in all, not bad for a little camera that fits in my pocket!
Posted by Martine at 19:28