We live about three miles from the outskirts of Cork.  Anyone who lives close to a city will know what I'm talking about when I say we're a dumping ground for unwanted pets. Several times a year, there will be a new dog abandoned in our area.  For a long time this was most noticeable around Christmas, but these days it happens any time.

A year ago, I picked Cookie up from the road near our house.  Within days of us making the decision to keep her, a lovely, gentle, enormous greyhound walked up the drive, into the yard and lay down to sleep in front of the office.  So thin he could be described as skeletal and with what looked like a gunshot wound on his shoulder, what could we do?  Kick him out?  We fed him, watered him and contacted all the rescue agencies.  A specialist greyhound rescue charity took him in a couple of days later and we breathed a sigh of relief.

This is this year's summer arrival. 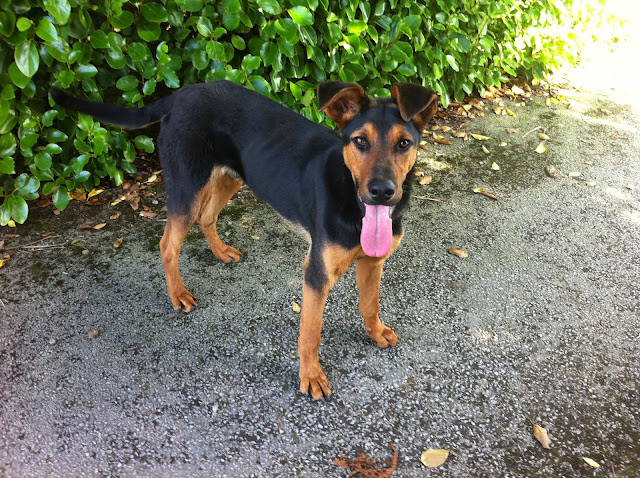 We think he's a little over six months - he has his permanent teeth.  He's a Doberman cross, our guesses on the other parent range from Labrador to German Shepherd to Great Dane.  He's a great big gentle giant of a puppy, painfully thin and lame in both front legs.

My neighbour fed him the first day he arrived in the area, then the next morning I was taking Cookie and Cinnamon out for their morning wee and the puppy followed us home - I swear I didn't encourage him!  He was my shadow for the entire day, while I skipped out the paddock, brought Aero in to treat his foot (there'll be more on that later) and generally did all the little jobs around the place.  He's now sleeping about three feet away from me while I write this - on the other side of the door, though, he is just too big and gawky to have in the house!

He's an absolute sweetheart, but his permanent home is not with us - our new landlord in France specifically said we can have Cookie and Cinny in the house, but no other pets.  So on Monday, we'll be onto the rescue organisations again.  I'm happy to foster him until we leave, but I'll keep hoping a permanent home turns up. I'm pretty sure whoever owned him is not going to come looking, though, and I wouldn't be too happy about them taking him back if they did turn up - this dog has been thin a long time, and I suspect the sore legs might be from insufficient food for his growth rate.

Fingers crossed that the right home comes along for him.

Email ThisBlogThis!Share to TwitterShare to FacebookShare to Pinterest
Labels: dogs