I think I can fit in here

Yesterday, I finally managed to clip Flurry.  I rode him in the arena first thing in the morning - he was lovely!  We worked on canter a little bit, so he had sweated up a lot by the time I finished.  I washed him down well and then worked with Aero.  By the time I finished, Flurry was drying out well, so I decided to come back to the farm with my clippers straight after lunch and pray that he wouldn't roll again.

I arrived back to a clean horse - what a miracle - so I brought him down to the stables and got to work.  Two of the other liveries were there, I think they are mother and daughter.  They own a grey mare and her eighteen month old son, who is a very handsome boy indeed.  I'll do a post soon about the farm and all the horses, and you'll see what I mean.

I had met the Mum and Daughter before, but, apart from the "Bonjour" required by politeness, they've pretty much ignored me - I am the outsider here, after all!  This time, though, they were doing some in-hand work with the foal, and came down to the stables.  They wanted to introduce him to puddles - a rarity here - and also let him see a clippers in action.  I had a good chat with the mum, whose name, strangely enough, is Martine.   Horses are a great common ground, and once we got going, we found we had a shared passion for good Dressage - it seems DuJardin, Hester and Munoz Diaz translate into every language!  We ended up with the daughter helping me finish off Flurry's clip, by pulling his front legs forward to so I could clip his "underarms," and also with a promise of hacking companionship - she is getting a Connemara pony to ride for the winter months, and will be delighted to have someone to ride with.
Alexandrine's mother Marie-Christine then arrived, to accompany Alexandrine the first time she rode a young horse out.  More chatting ensued, as she tacked up her horse, Pietro.  She told me that Pietro is supposed to be a Criollo, but doesn't have any papers.  She's only had him since last January, she bought him when her old horse had to be retired.  On his feet, he wore Renegade boots - her old horse was barefoot for seventeen years and Pietro is making the transition to barefoot.  She does her own trimming, but gets the farrier to check her horse every eight weeks or so.  She rides in a rope halter - Alexandrine helped her train Pietro to be rideable in a halter instead of a bridle when he arrived last January.  On his back, was a western type saddle, with a bridle slung over the horn - just in case she needed extra control if Alexandrine's youngster was difficult.  Also slung over the horn was a leather case, containing a large pair of snips and a foldable saw - she told me that, as she rides along the local trails, she cuts down any low branches and helps to keep the trail clear for everyone.  I also noticed that she was wearing a helmet - I was a little surprised, actually, that's quite un-French.  I remarked on it and she said she always wears one, and I nodded, I always wear one too.

I ended up thinking, this lady is a serious horsewoman, she's a wee bit older than me but is not only still riding (a lot), she's doing her own horse's feet & she works on keeping the trails clear for the benefit of others.

I was finding it hard to keep up with the four-way chat and my brain was rapidly approaching meltdown,  so I politely excused myself and took Flurry back to his field.  But before I left, Marie-Christine made a hacking "date" with me for the following morning!  Brilliant!  Someone local to show me around!

I was really looking forward to our trek the following morning.  I decided that I would ride Flurry, so I could just relax and enjoy myself - Aero is still a little unsettled and would be something of an unknown quantity (to me) with strange horses.  Marie-Christine watched me tack up and asked if I used the Renegades on Flurry.  When I said no, she nodded and said his feet looked good (go, Flurry's feet!!).

Once we were ready, we walked up to the arena to meet Alexandrine, who was accompanying us with the young filly.  Marie-Christine mounted from a block, and slipped a piece of carrot to Pietro.  Alexandrine asked if I was going to walk for a while, as she was going to walk with the filly until she settled.  I said no, I would mount the same as her mother and pointed at the block.  I mounted, and Flurry turned his head around for his "standing still to be mounted" reward, which I had ready.  When I looked up again, they were both smiling broadly and Marie-Christine said "Your horses are barefoot, you use Renegades and you give them carrots, I think you are the same as us."

"I think I'm in the perfect place" was my reply, as we set off down the drive.

The hack itself was perfect, uneventful.  The young filly settled quickly and Alexandrine mounted.  We were on the road for about 50 meters at the start and at the end, otherwise we were on woodland trails and forestry roads.  Idyllic.
In the middle of the woods was this very cool tree-house, where we met some bikers who had stopped for a break.  Alexandrine offered to take a photo of me, which was very nice of her, so here I am grinning like an idiot over my shoulder. 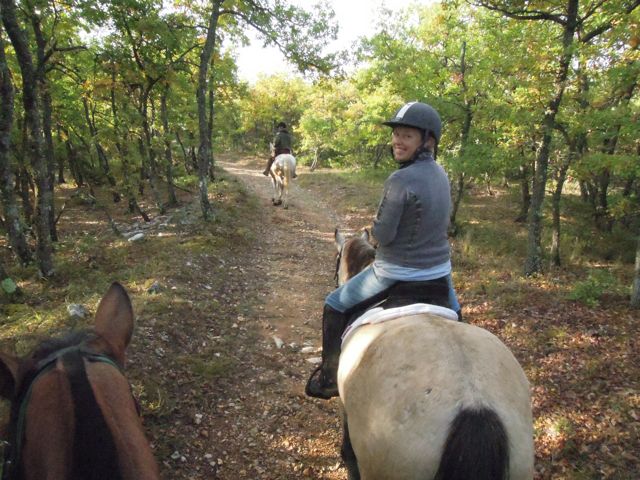 Alexandrine's youngster is a Lusitano, so her mane and the top of her tail have been clipped.  She's just with Alexandrine for breaking, and will be going home in about two weeks.

After about an hour, Marie-Christine asked if Flurry would be ok to give the filly a lead home.  Sure, I said, so she bid us farewell and headed back towards Reillanne where she lives, but not before she offered to meet up with me again to show me around some more - yippee!

Alexandrine and I were continuing through the woods when we came to a cleared area, where there was someone with a tractor and trailer, loading logs.

OH!! Does he sell wood?  We need to buy some for the winter! was my very enthusiastic response.

It turns out he does, so we stopped for a chat and I got my order for winter firewood sorted out.  HAH!  That's one Dreaded Foreign Fonecall I won't have to make!

To finish the morning, I got a spin on the Quad with Alexandrine, just from the horses' field shelter back to the stables.  I've never been on one before, what fun!

To end a great day, our first visitor arrived.  Granny is here for the next two weeks.  She had an uneventful flight from Dublin to Nice but is a bit tired - currently snoozing in the armchair beside me.

All in all, it's been a really good couple of days and I'm beginning to feel like I will fit in well at the farm.  I'm determined to keep speaking my crap French.  Marie-Christine offered to speak English, which was very kind, but I said no, I have to learn.  They were both correcting me as we rode along, which I appreciate, I just hope I can retain some of their corrections, otherwise they will start to think I'm some sort of a dunce!  Later on that day, I met Georges, Alexandrine's Papa, and we chatted for a bit - he was speaking very slowly and clearly, and offered words if I was stuck.  They are all being so kind, and I really appreciate it.

I'm looking forward to seeing what the next few weeks bring.