I used to be very active in my local riding club, I did pretty much everything with my little mare Hally.  Unfortunately she kept going lame, at the same time my kids started show jumping on their ponies, so I stopped riding for the best part of ten years and was the dedicated "Pony Mum" for all that time.  I tried to get back into it from time to time, but I found it very difficult to build up my fitness level without wrecking my back.
Two years ago, at the age of 48, I did some serious soul-searching, and asked myself was I ready to say "I will never ride again?"  The answer I came up with was an emphatic NO, so I decided it was time to buy a horse JUST FOR ME!  I found Flurry on a website (donedeal.ie), there were photos of him jumping a bank and he was described as being six years old, fifteen hands and had hunted, hunter trialled and pony clubbed.  He was the second horse I went to see, and my youngest daughter came with me to try him out.  She is such a lovely rider, she makes any horse look good, and Flurry looked fabulous under her!  I sat up on him for a few minutes, and he felt ok, but I was so cautious about committing to "only the second horse I'd seen!!" I will never be able to thank my daughter enough for saying "MUM! He's exactly what you're looking for! Just buy him!" 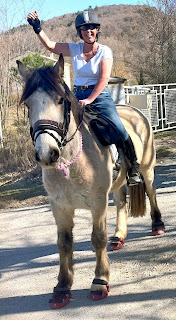 Flurry came home on a weeks trial, and now a year and nine months later, we've just completed a 500km trek across France!  I'm fitter than I've been for years and I find it hard to believe that I survived four weeks of 6-8 hours in the saddle every day.  My back is giving me no trouble (but my ass is killing me!) mostly because Flurry is so comfortable - he is a real armchair ride.  I'm also very proud of the fact that we qualified for the Dressage Ireland Championships last year, despite Flurry never having done any flatwork before he met me.  I'm looking forward to getting back into my arena when we get home, but I think I will have to accept that trekking is Flurry's forte!

He astonished me on every step of Le Big Trek.  The steeper the slope, the rougher the ground, the harder he tried.  He accepted the strangeness of herds of goats with clanging bells, the weirdness of meeting bicycles on muddy paths in the forests, the noise of motorbikes passing us on narrow lanes, although he never quite got comfortable with donkeys or rollicking herds of cattle!  He enjoyed the "coup de couer" views of Provence and the Drôme every bit as much as I did, and was happy to stand gazing into the distance while I snapped photos.  I usually walked for about twenty minutes every two hours, and he would follow along behind me on a loose rope, putting his feet where I put mine, occasionally nudging me between my shoulders gently to let me know he was still there.  He is my horse of a lifetime, and he has given me back my confidence and my fitness.

His favourite thing in the whole world is a good roll, he is not truly happy unless he is plastered with a thick layer of mud.  Ah well, no-one's perfect! 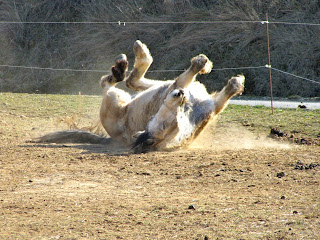