(From the Smallest Upwards)
Cinnamon
Many years ago, the Daughters were participating in a weekly show-jumping league at a local Riding Centre.  One week, in a fit of machiavellian genius, one of the judges brought along a basket of tiny puppies and left it in the canteen area in the "care" of a couple of teenagers.  Needless to say, she went home with an empty basket - every child (and quite a few adults) at the show descended on the puppies with Ooohs and Ahhs, and they were kissed and cuddled for the day.
We didn't need another dog.  We had Scamp, Molly and Cayley - three dogs is quite enough, thank you.  I saw the puppies, and said "NO!" hoping to pre-empt any "Mo-o-o-o-o-o-o-o-o-o-o-o-m?" pleas (it's amazing how many syllables they can squeeze into that word when they want something).
My pre-emptive bid was futile.
In between show-jumping rounds, they went straight back to the puppies, cuddling, kissing and going into girlie raptures about their smell.  There were a few "Ple-e-e-e-e-e-z-e...." attempts, but I deflected them all resolutely.
Then the Eldest played her trump card, in a move that was clearly all or nothing.  Of course it began with "Mo-o-o-o-o-o-o-o-o-o-o-o-o-o-m....."
I waited, the word "NO!" poised behind my lips.
"You know how I did really well in my exams" she did, it was her Junior Cert, equivalent to UK O-levels "and I never got a present to say Well Done and I never even asked for anything.....?"
Damn, I thought, this is not looking good, the "NO!" waiting in my mouth reducing in size to a "no..."
"Well if this puppy -" cue holding up minute brown thing with a white chest, black button nose and HUGE Bambi eyes "was my Junior Cert present, I'd promise to clean up after her, and look after her always and take her to college with me when I leave home..."
Little sister meanwhile is standing beside her, nodding gravely and saying "I'll help her, Mom, I promise..."
Gulp, that "no..." was now down to a "no..."
"She smells like cinnamon, here, smell her..." brown thing is waved under my face for nasal inspection, it did indeed smell like cinnamon "that's her name, she's called Cinnamon!" 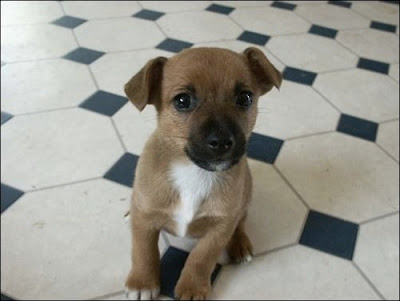 What could I do?  I was artfully outplayed and out-manoeuvred by the Daughters.
The "no..." turned into "oh, well ok, but you have to look after her and I'm not keeping her when you leave home-" and we all know how that was going to turn out!!
Ten years later and no, Cinnamon and Eldest Daughter did not do their own version of Legally Blonde and go to college together.  Cinny is my little shadow and constant companion, and after four months in France, has perfected the art of long-distance begging any time we're in a Cafe or Restaurant.
I think she was born to be a French dog. 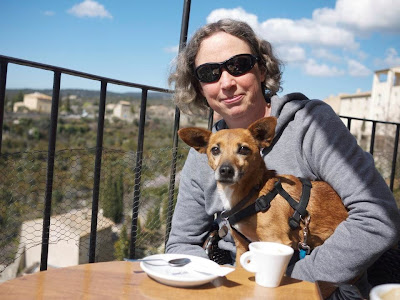 Cookie
Cookie is our problem dog.  We didn't want or need another dog.  We had Cinnamon, slightly elderly Molly and dear old Scamp, who was struggling through her last few months.  The last thing we needed was a hyperactive rescue dog, disrupting Scamp's sleep, threatening Molly's position as top dog and terrorising our cats.  But when I picked up a very distressed and panicky little Jack Russell X on a road nearby, that's exactly what we got.
We weren't going to keep her, no, definitely not.  We were just going to mind her for a few days/weeks, until her owners turned up.
--- SIGH ---
Not only is she still here, but she came to France with us for four months...
We started a Dysfunctional Dogs page on the Wanderly Wagons Blog, just for fun, and to help us keep a tally of what exactly our dogs damaged while we were in rental accommodation.  My friend and co-Wagon, Anne, has a somewhat difficult Lab/Rottie cross named Fionn, and we were curious as to which dog would be the naughtiest.  For a short while, Fionn and Cookie were pretty level, until Cookie eventually surpassed him by obliterating the cat-flap in a (successful) attempt to break out and give chase to the cats, her mortal enemies.
Since we've come home, she has not endeared herself to me at all.  She has attacked Molly several times, fixated religiously on our cats every time she is taken outside for a toilet break, stolen an egg (my fault, I left it too low down), knocked all of Molly's expensive prescription diet dog-food off the shelf and scoffed as much as she could, (leading to a subsequent toiletting accident) and stolen and eaten a round of Reblochon cheese I'd brought home from France (another toiletting accident ensued).  She has darted out the back door between my legs twice and spent a merry half hour bounding around our garden and paddock in pursuit of our cats, ignoring all of our attempts to entice her with yummy treats.
Still, like a troubled child, she's lovely when she's good - especially when she's asleep. 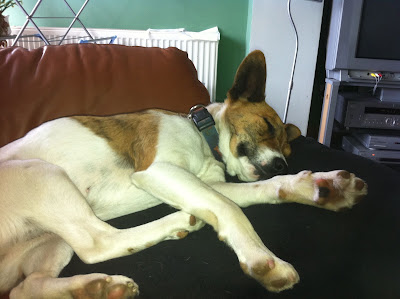 Molly
When I discovered the Bearded Collie breed, I wanted one!  They were (and still are) few and far between here in Ireland, so my name was put on a waiting list with a breeder, and about a year later, Cayley arrived.
Several years and three mongrel litters later (one planned, two accidental) I finally managed to breed a pure-bred litter of Beardies.  I kept the only bitch, Molly. 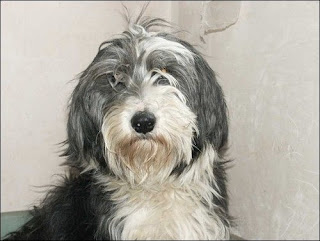 Beardies are by nature hyperactive and noisy, but Molly was different.  She'd run around in crazy circles alright, but most of the time, she just wanted hugs and cuddles.  A very confident but polite dog, she assumed that people were there just to be friends with her, and with her soft brown eyes, flowing coat and gently waving tail, she won hearts wherever she went.

Now the soft brown eyes are dim, the once beautiful coat is harsh and patchy, but the tail still wags gently when I wake her in the morning and she still loves cuddles.
Despite her failing health, she does her best to remain that most wonderful of companions, A Good Dog.