Up to now, these were the only hedgehogs we've seen here.  My friend and co-wagon, Anne, has a dog, Fionn, who regularly finds hedgehogs in her garden.  He's part Rottweiler, and he just picks them up, spines and all, in his huge jaws.  They generally don't have a happy ending, although Anne has managed to rescue a few.  We've had many dogs here over the years, some of them dedicated ratters/rabbiters (Scamp and Kiwi spring to mind!) but we've never had any similar occurrences - they've just stayed away from hedgehogs, I suppose.

Last week, the LSH let her loose to play with Dylan.  We've done this a few times, and it's been lovely to see them tearing flat out around the paddock.

This time, she was less intent on play.  She started following a trail at the back of the stables, and within seconds, had found her prey, a hedgehog, buried in the undergrowth, sheltered by an old pallet.  Barking escalated to a hysterical level as she tried to get her little snout through the sharp spines.  Somehow, she succeeded, and raced off into the paddock with her prize, Dylan in hot pursuit.

I will draw a veil over the next few minutes.  It was not pretty.  The LSH eventually grabbed the dogs, one at a time, hauled them back to the yard and locked them in a stable.  It was much too late for the hedgehog, unfortunately.

A week later, during a moment of human inattention, Cookie slipped out the back door late at night.  Within minutes, she had found another hedgehog.  Unfortunately, her technique is improving.  Shining a torch through a thick hedge, I could see what was going on deep within.  She has learned that a moment of pain is worth the gain, as she stuck her sensitive nose underneath the poor hedgehog and flipped it over.  Once again she ran into the paddock with her prize, but her barks and yelps made her easy to find.  The "terrier shake" finished off the hedgehog, and we left it in the paddock for the late night scavengers and took our bloodstained murderess back indoors.

A third hedgehog made its way to that giant slug-patch in the sky this week.  No dogs were to blame for this guy.  I'm ashamed to say that the culprit was my lovely Aero.

I turned him out in the arena - he is still not allowed into the paddock because it's too wet for his injured hoof.  He was fresh and frisky, and trotted off to investigate a tuft of grass in the middle of the arena.

Ouch!  That was no tuft of grass, and he received a sharp jab on his muzzle.  Quick as a flash, he reared up and slammed both front feet down, even as I was opening the gate to come in and rescue what I had immediately realised was a hedgehog. 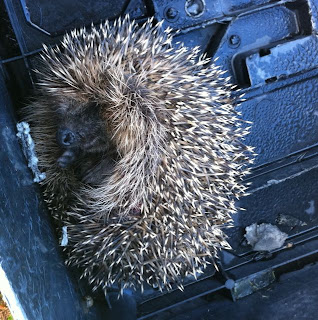 It's hard to tell how badly injured they are through all those spines.  I carefully rolled him inside the step-stool we use as a mounting block.

There was no blood, and I could see him breathing, so I hoped he was ok, just curled up defensively.  I put him in a safe spot, between some old bales with lots of nettles around, but when I came back to check him later he was stretched out, dead.

I'm not upset at my animals' behaviour - dogs are hunters, and Aero reacted in a primal way when something inflicted pain on him.

I am, however, gobsmacked that after twenty years of scarcely seeing a hedgehog, we've seen three in such sad circumstances, mere weeks before we leave.  I bet the rest of the hedgehog population are counting the days until we go.

I'm now pretty sure I know how Cookie will meet her end.  She'll escape in France and take on something similar but much more dangerous - a porcupine, a polecat, a lynx, maybe even a snake - and she'll meet her match.  Hedgehogs around the world will rejoice on that day.

Until then, we'll continue to try to keep her under control.

Sigh... is she the World's Worst Dog?