Fleeting impressions of the trip so far :

This is what Stupid O'Clock looks like
I've never been parked on the top deck of a ferry before
Hello Wales, just passing through 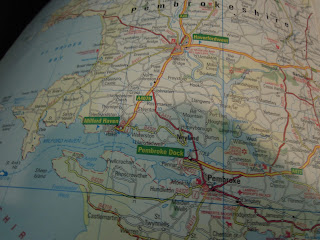 Cool cars on the motorway
London Traffic (a bit of a shock to two country girls)
Eating pub grub with flashing disco lights and loud 80s music.  The DJ got it completely wrong - the audience were the right age profile for the music, but that automatically made them the wrong age profile for the decibel level

Carrying a LOT of stuff from Jeepy to said house
Nando's

A few other loos (I'm not saying it was because of the food from Nando's, but three out of four of us had dodgey tums for the afternoon)

Panicking and getting a cab instead

Worrying that the cab driver was lost

Arriving at The New London Theatre JUST in time
War Horse.  Long anticipated, it did not disappoint.  My non-horsey but animal-loving friend did not know what to expect - I had told her it was a play about a horse done with puppets.  To quote her Facebook page


Well now.... just back from an evening in the West End.... went to see War Horse in Drury Lane.... WOW doesn't even begin to describe it.... awesome is not adequate but suffice to say I am completely gobsmacked.... and that doesn't happen often.... great night and great fun so far on this trip

Squished like sardines in the tube on the way home.
My first ride on a London Red Bus, watching all the late night revellers falling on and off

The Rose Hotel, which takes you back through time and gives you the authentic experience of a 1950s London boarding house (although I don't think that's their intention)
Brick Lane and Spitalfields markets.  There's an awful lot of STUFF there.  Thankfully, I have de-STUFFed my life and I wasn't tempted to start STUFFing it again.
Nigel the SatNav repeatedly telling me to turn down one-way streets in the middle of London

On the road again... 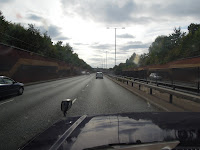