Not so bad, then!

I didn't like to say it - I was embarrassed for her. 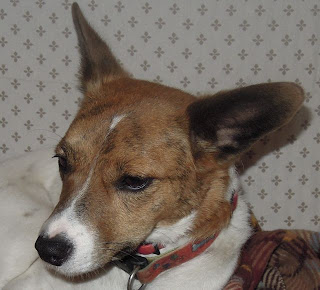 But Cookie, despite making great strides recently off-leash, learning to come when called and learning to stay focussed on us, was VERY, VERY naughty.  Twice.

The first time was when I went for a walk in the woods above Reillanne - a familiar spot, one of my favourites.  I kept her on the leash until we got to the top and started to walk along the top of the ridge, then I let her loose and started throwing the ball.  She was good.  She was focussed on the ball and the treats that I gave her in exchange for the ball every time.  Then I got a text from the LSH.  Not an ordinary text, a Viber text, so it meant I had to go through a couple of extra steps to read it on my iPhone.  I took my mind off the dog while I pulled up the text, and WHAM! she was gone.  Not completely disappeared, never to be seen again sort of gone.  No, it was more a WHEE I'm free and I'm going to rampage through the woods, keeping an eye on you all the time but you're not going to catch me sort of gone.

I tried hiding from her, which used to work a treat with our Beardies years ago.  When she eventually found me, crouching behind a bush, she cocked an ear my way Oh there you are and galumphed merrily past me.

I tried feeding Cinnamon treats - jealousy has worked in the past, but not that day.

I tried throwing the ball, literally under her nose.  She couldn't have cared less, didn't even look at it.

I tried sitting down, hoping that she would come close and start sniffing at stuff nearby.  She seemed to feel that my staying still gave her license to roam further afield and completely disappeared into the woods, so deep that I could no longer hear her bell jingling.

At that stage, I thought the best thing to do was turn around and make my way back to the jeep, calling from time to time.  Eventually, she burst out of the trees far, far behind me on the trail and headed off IN THE WRONG DIRECTION.  I called, and she did a 180° turn and tore down the trail towards me, side-stepping neatly as she neared me and running past the proffered treat in my hand.

Eventually, by making a huge fuss of Cinny and stuffing her with treats, I managed to persuade Cookie to come close enough to grab her.  I made a fuss of her, although I wanted to throttle her, and she went back on the leash again.

A couple of days later, the LSH took her to the Watermeadows for a run.  I warned him. He said he'd leave her off anyway.

He unclipped the leash and she was gone like a snot from a sneeze.  The good thing about the Watermeadows, though, is that you can see where she is, most of the time.  She ran enormous loops, keeping the LSH roughly in the middle of her loops, but refused to come anywhere near him, not interested in the ball, not interested in treats.

Being better at throwing than me, he managed to throw a few treats right under her nose and got her attention that way.  He caught her in the end, but the two incidents gave us a fright and is making us rethink whether we'll ever be able to trust her 100%.

I went for a walk in the Watermeadows this morning with Gilla and Poppie.  This time, I reverted to our original policy of tying a long, light cord onto Cookie's harness.

I threw the ball, she tore after it, snatched it from under Poppie's nose and came galumphing past me, with her naughty can't catch me expression on her face.  I could, though.  I grabbed the trailing end of the cord and pulled her up short, and she came straight back to me, all happy and tail-waggy.

And that was the end of it.  We had a lovely walk.  Poppie and Cookie chased the ball and brought it back every time and got loads of treats.  Cinnamon chased moles (unsuccessfully).  They explored by the river and in the woods.  And Cookie kept coming back.

Maybe there's hope for her after all if we give it enough time.

Finally, good news on the Cinnamon front.  The vet rang this morning to say that her lumps are a benign kind of sebaceous gland tumour and are nothing to worry about.  Phew. 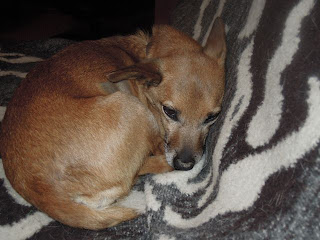 And REALLY finally, thanks everyone who voted for me in the ESMA awards - I didn't come anywhere (sniff!) but it was a huge honour just to be nominated.

Maybe I might share the Gobsmacked Face with you if I have enough glasses of wine some night.
Posted by Martine at 21:10