Today we went for a hike to the Saut du Moine (the Monk's Leap).

Between 1385 and 1395 there was a bad guy, Raimond de Turrenne, who earned himself the nickname of The Scourge of Provence.  Basically he went around with his armies, generally trashing the place (he's responsible for the first vandalism of the Tour d'Aigues, when the original building, the central keep was seriously damaged) and trying to force the decent, law-abiding Provençal folk to pay homage to someone other than their rightful liege, the Comtesse de Provençe, Marie de Blois.

One day, his forces were attacking the abbey at Valsaintes, about 10km from here as the crow flies.  One of the monks fled in terror, with the attackers in hot pursuit.  Believing his God would protect him, the monk faced his horse at a waterfall on the Calavon river and jumped off the edge into the water below - a true leap of faith.  History does not record whether he survived or not - at least, I can't find out for sure if he did!  But the waterfall has been know as Le Saut du Moine ever since.

I've been looking at trekking routes, one of which would bring us past Le Saut de Moine, and I wanted to check how horse-friendly the terrain was.  We parked the jeep 2km away from Valsainte and set off on foot, Cinnamon running along off-leash, Cookie on the leash trotting beside the LSH.

Following on from the OOPS post, let me just clarify this - Cookie is never intentionally off-leash.  She is just too unpredictable, too disobedient and too easily distracted to trust.  So what on earth are we going to do when we start long-distance trekking?  Leave her in kennels every time?  Well, we don't want to do that.  Attach her to a lunge line and lead her along while we ride?  Somehow, I don't think that's a safe option, and I think Aero and Flurry would take a dim view of it.  We've been talking about trying her off-leash for a long time now, so that we can start to develop some trust in her, and so that she learns to follow us as we hike along.  Once we can trust her while we're on foot, then we start introducing the horses into the picture... that's the plan, anyway.

Anyway, we decided that today was the day.  Like the monk from Valsainte, we had to take a leap of faith and just give Cookie her freedom.  We unclipped the leash and kept her attention focussed on us by throwing the ball a couple of times.  I had two tennis-balls with me, every time she came back with one, I would give her a little treat and throw the other while I picked up the first one.  It was going great - and then, BAM, a scent distracted her, she spat the ball out as she ran along and disappeared into the bushes, oblivious to our calls and oblivious to her abandoned toy. 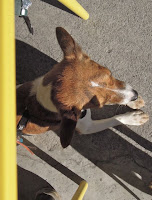 What should we do? we wondered.  Let's just keep walking, she'll either follow or she won't, we have to trust her sometime, we said...

And she followed!  She spent the whole three hour walk off-leash apart from two occasions - once when we were passing through Valsaintes and once when we met some other dogs - Jack Russell Terriers, as it happened!  Our walk was about 12km, but between all the back & forth and side to side exploring she did I reckon she covered the best part of 18km, most of it at a run.  We called her back every so often and gave her a little treat each time.  By the time we were nearly back at the jeep, it was just like walking with a normal dog - she was pretty tired, and happily trotting along, just ahead of us.  She was exhausted afterwards, and actually lay down, asleep, under my chair when we stopped into a Café - unheard of behaviour, normally she stands on full alert the whole time!

Leaps of Faith aside, Le Saut du Moine is a stunningly beautiful spot.  There will be a mounted, picnic expedition there in the not too distant future... 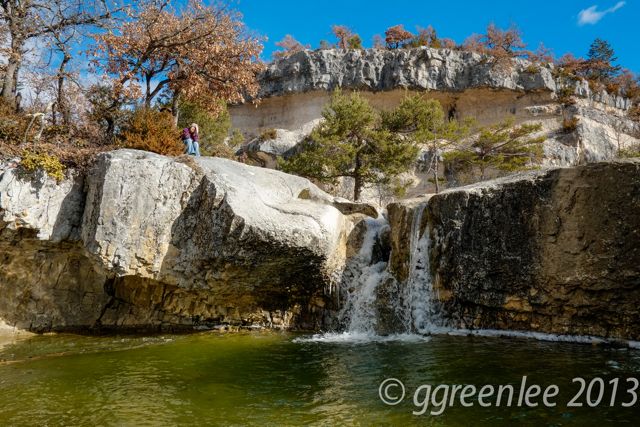