The horses, I hear you shout, what about the horses??   We're back in Provence five days now and I haven't mentioned the horses, in fact it is (GASP!) THIRTY-SIX DAYS since I did a proper horse post and in fact it's just as long since either Flurry or Aero were ridden.

Before I talk about my beloved equine quadrupeds, I must mention jetlag.  In my youth, I shrugged off jetlag as being like "A couple of all-nighters."  If only it was so simple now.

I was shagged when we got to California.  My stomach was in bits and I couldn't sleep, but in the excitement of it all, I kept going.  There were a couple of mornings when I looked in the mirror and thought "jeez, I look like death warmed over" but family and the festive season helped me over the worst of it.

Jetlag is always worse in the other direction.  We've been waking up at 2, 3, or 4 am since we got back, unable to get back to sleep (him) until 6 or 7 am (me).  I've visited the horses every day but had no energy for anything other than picking out their feet and grooming.

Even grooming was a bit much for me - both horses were plastered in mud, sporting dreadlocks and dags throughout their manes, tails and extra-long coats.  Every day, I chipped off another layer, and every day they did their best to replace what I had removed.  The plan was to hack out on Saturday, and to be fair, by Saturday morning, they were reasonably clean - my hard work was worth it!

The weather was glorious - about 15C, with the sun shining non-stop.  We decided to do one of the easy, one-hour routes that we all know well, heading across the road, through the woods towards the Couvent de Notre Dame, then back up, crossing the road again and looping around at the back of the farm.
Bearing in mind that Aero is probably more horse than I need at the age of fifty, was I nervous about riding him again for the first time in ages?  I actually can't remember when I rode him last, I'm sure I rode him since the osteopath visited, but I didn't mention it in the blog so I can't be precise about when, where or for how long.  Anyway, no, I wasn't nervous - if Aero is going to be silly (nervous/tense/jumpy/excited) then it won't make any difference whether he was ridden the day before or three months before, he'll get wound up no matter what.  Before we set off, I said that if he was getting silly, then I would just lead him the whole way around, but both boys were so relaxed with the warm weather that I was pretty sure it wouldn't come to that.

I was right (I love it when I can say that!!), they were both very relaxed but very happy to be going out and doing things.  Flurry led most of the way, but Aero went in front a couple of times with no issues whatsoever.  We had a perfect First Hack of the New Year, and we agreed that if all our hacks are like this in 2013 we'll... ehhh... be complaining of boredom!!
My camera is having battery issues at the moment so the LSH was on photography duty. You can probably tell from the improved quality!
We did the serious French trekker thing of leading the horses at the beginning and at the end of the ride.  It does make sense, it surely helps them warm up and cool down properly, but it also gave us a chance to ease out our tired and cramping legs after an hour's riding. 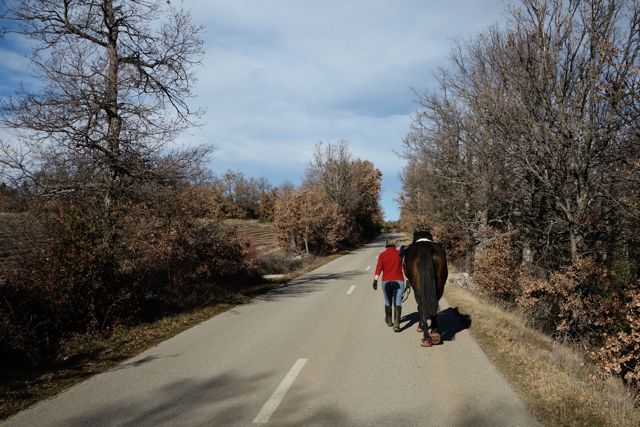 After riding, we came home, had a quick lunch (a glass of 7Up and a banana!!) and went out again to the Montagne de Lure.  We've been threatening to go there for the last three months to try to catch a view of the Alps bathed in the evening sun.  We were surprised to find that there's a ski station near the top - it seems to be a very easy, family oriented slope, with lots of kids and learners around.  We went for a short walk with the dogs.  Cookie was crazy in the snow, rolling and wriggling in it to her heart's content.  We found it tougher walking in the snow than the dogs, and turned around after about fifteen minutes.  Unfortunately, we never got the amazing view of the Alps that the LSH is looking for, the road was closed after the Ski Station and the view eastwards was blocked by the mountain's peak.  We'll have to try again, using an approach road on the eastern side of the mountain.

We drove home in the middle of a superb sunset, so much so that the LSH parked at the side of the road, leaped out of the car and snapped this lovely shot of the nearby village of Lincel. 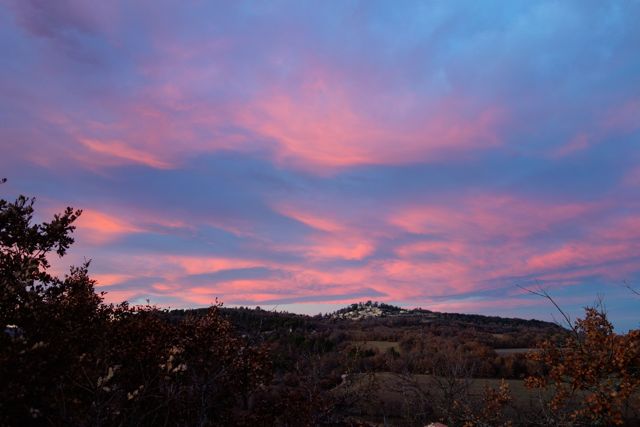