It was a crisp, cold morning, there was still a light covering of snow in the field in front of our house,
and the Alps were glistening prettily in the distance
so I decided to take the dogs for a walk in Reillanne forest.  Cinnamon politely declined, however, ("you must be joking, it's bloody freezing out there, Mum!") so I set off with Cookie.  The road was clear and dry all the way up the hill, but there was a nice covering of snow at the forest itself.
Very inviting!

It seemed like no-one had walked through the snow before us, and once we turned off the lane pictured above onto a narrower trail (the one we followed on the horses last weekend) we were suddenly walking through virgin snow.

Virgin apart from some animal tracks, that is.
I guessed these were fox prints - they were a little bigger than Cookie's.  I didn't think they could be dog prints, as there were no accompanying boot prints, but I suppose they could belong to a stray dog.

What on earth does this belong to? I wondered. 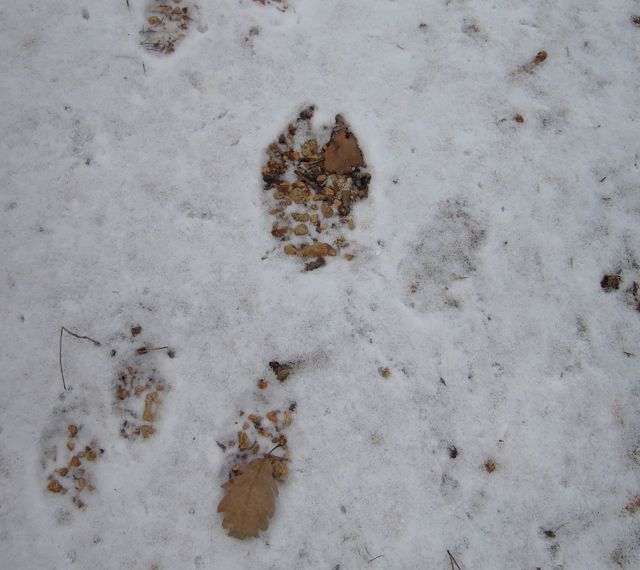 It was quite big (the oak leaf gives some idea of scale) and seemed to be cloven hoofed.  Too big for a sanglier, too big for a deer, it seemed large sheep-sized, or small cow-sized...

Because it was interleaved with these, I came to the conclusion, rightly or wrongly, that it was the slightly mis-shapen print of a hind foot of a very large dog : 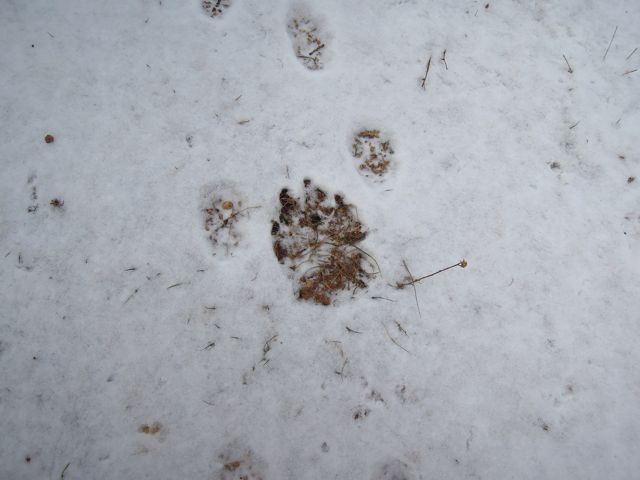 They petered out after a while and then seemed to reappear, although the back feet were now leaving a clearer "paw" print.  This time, I actually did a double take, and realised just how big this animal's paws are.  I fumbled in my pockets for something to give scale and found a €20 note - this is just over five inches long and just over three inches wide. 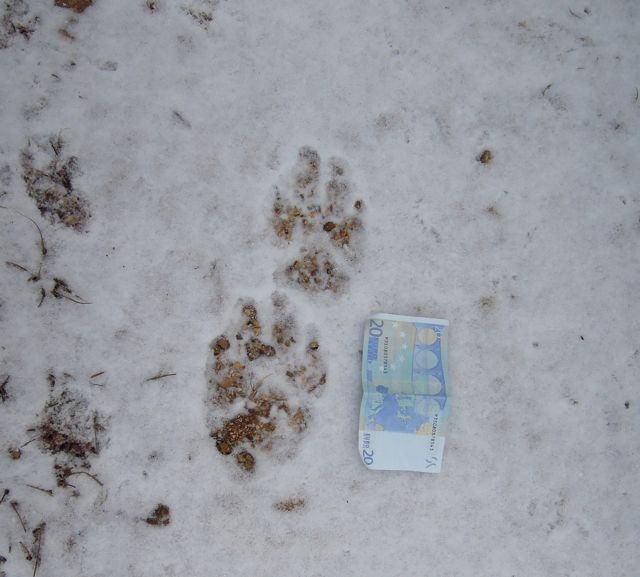 Those are some seriously big paws.

Bearing in mind that there were still no boot prints around, was I looking at the tracks of a very large dog who had gone exploring in the woods on his own, or was I looking at wolf tracks?  Whichever it was, I certainly didn't want to run into the owner of those paws...

Cookie and I kept our walk short, just in case.

Wolf or dog, does anyone out there have an opinion?
Posted by Martine at 13:01